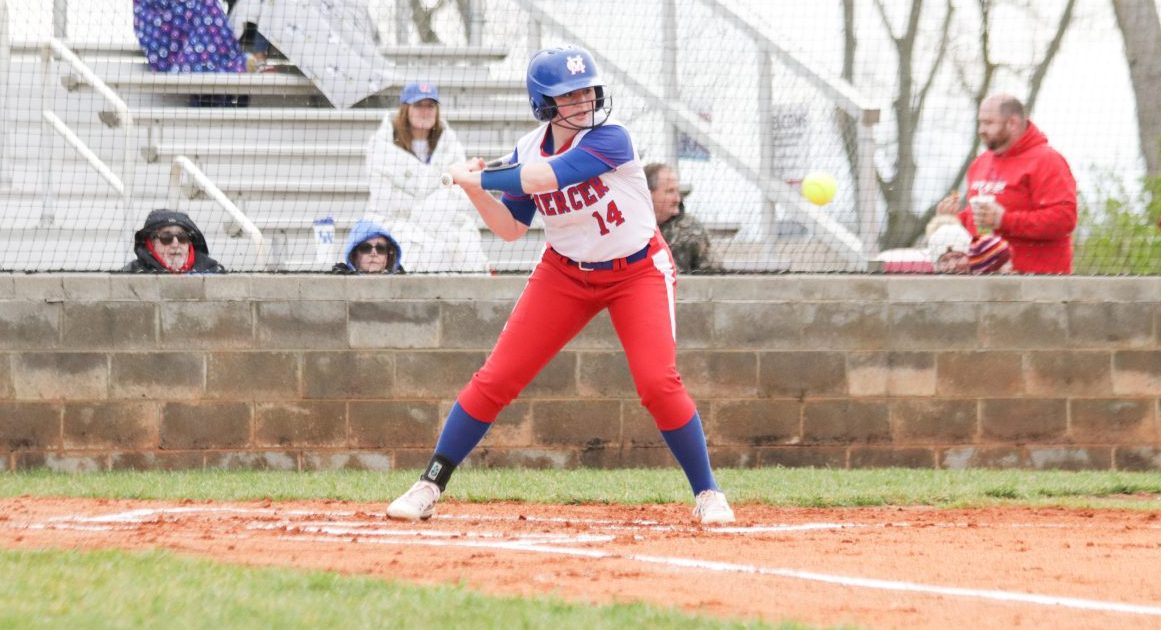 The Harrodsburg Herald/Wesley Bird
Senior Elle Prewitt led the way for the Titans with two hits and one run against Woodford County on Thursday, April 7.

Mercer struggled finding consistency in their batting rotation. They had players in scoring position, but couldn’t get them home on a few occasions. The Titans have relied on sophomore pitcher Ashley Howard heavily this season. The Titans have totaled 817 pitches in seven games so far. Howard has 689 of those pitches (84%) and has pitched the last six games straight allowing 32 runs while striking out 62 batters. Howard started in the circle for Mercer. Hanna Beasley caught a pop out from Woodford’s first batter and Howard struck out the next one. Avery Robinson caught a fly ball in right field to make quick work of the Yellow Jackets.

Senior Elle Prewitt led off for the Titans with a pop fly to get to first base. Kallise Gammon followed up with a big hit to left field for a double. Mercer couldn’t capitalize with Makayla Burns, Howard and Beasley all getting out to end the first ending.

The Yellow Jackets kicked off the second inning with a single off a bunt. Beasley caught a pop fly and Emily Worthington made a catch in the outfield for two quick outs. Woodford freshman Lailah Ashburn hammered a homerun past center field and scored the first two runs of the game in favor of the Yellow Jackets, 0-2. Howard struck out the batter to get the third out. Mercer struggled batting with Madisynn Griffin, Haylee Ransdell and Worthington all striking out to end the second ending.

In the third inning, Howard allowed a single, but Prewitt collected a ground ball for an out. Woodford got on base with a bunt putting a runner on first and third base. A fly ball and error led to the Yellow Jackets scoring another run, 0-3. Woodford was out on a ground ball to Howard, but scored another run to go up, 0-4. Howard walked the next batter and Ransdell got the final out at home plate with a tag.

Ransdell grounded out to begin the bottom of the third inning. Prewitt and Gammon were both walked. Burns hit a ground ball and with some help from a Woodford error. Prewitt scored Mercer’s first run, 1-4. Howard and Beasley both struck out swinging to end the third inning.

Howard held strong in the top of the fourth with three straight strikeouts in 14 pitches.