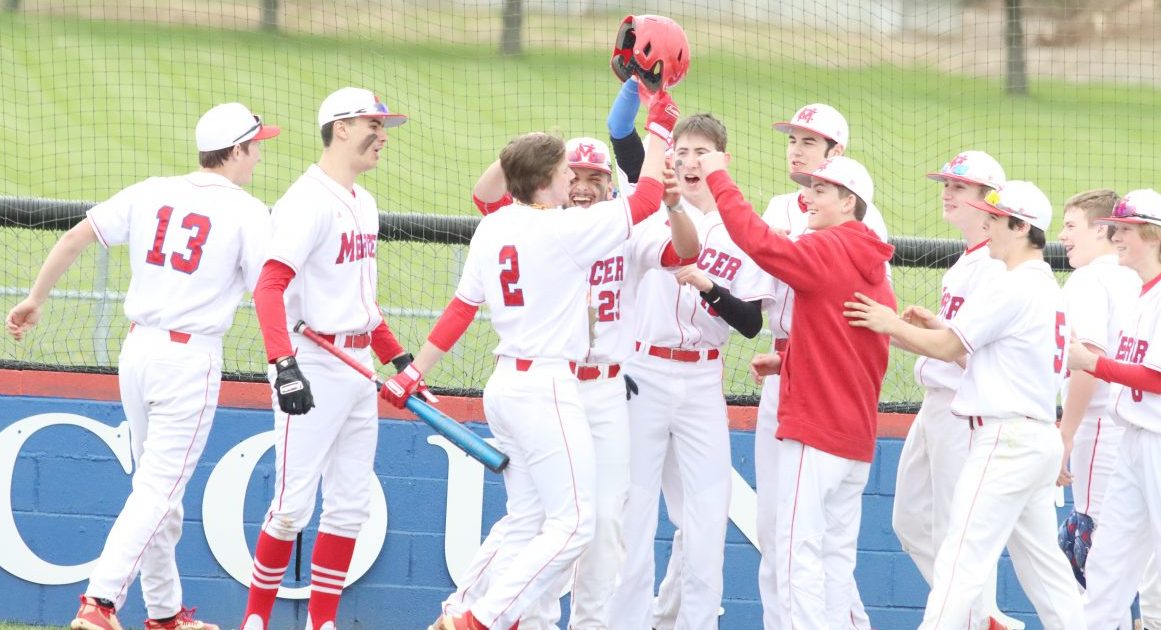 The Harrodsburg Herald/Wesley Bird
Senior Sam Baughman celebrated with his team after hiting the first of his town homeruns in the Titans’ district.

The Mercer County Titans (8-4) started district play with a commanding, 10-3, victory over the West Jessamine Colts  (5-7) Thursday, April 7. In the cold afternoon home game second year senior Sam Baughman led the way for the Titans with two homeruns, 3 hits, 4 RBI’s and came in as the relief pitcher with five strikeouts and zero runs allowed.

Since joining the 46th district in 2006, the Titans have played West Jessamine 40 times. The Colts currently have the edge in the two teams overall record, 25-15, but Mercer hasn’t lost to West Jessamine since April 23, 2019.

The Titans 10 runs on Thursday marked the third time they’ve scored in double digits this season. The Titans other two double digit outings were Franklin County, 12-6, and Campbellsville, 13-3.

Junior Evan Hart started on the mound for Mercer. Riley Peavler came away with the first out in the left outfield. The Titans stopped the Colts with a double play from Cayden Devine to Isaac Beasley on first base.

Mercer’s first at bat started with Devine striking out, but Baughman went yard with his first trip to the plate to put the Titans out in front, 1-0. Beasley grounded out and Hart struck out to end the inning.

To start the second inning, Hart walked the first Colt, but struck out the next three to shut down West Jessamine.

In the bottom of the second, the Titans put the game out of reach with six runs scored. Aaron Caton got the ball rolling with a double to left field and a slide to beat the second base tag. Eighth grader Carter Devine took Caton’s place on third as a courtesy runner and Logan Martin reached first on an error. Jackson Peavler hit a bunt to make it to first and bring Carter Devine home, 2-0. Jonathon Logdon struck out to give Mercer their first out. R. Peavler followed his brother with another bunt and Martin cruised home, 3-0. J. Peavler took advantage of a Colts error to beat the tag at the plate, 4-0. Cayden Devine singled on a ground ball to left field and brought home R. Peavler, 5-0. Cayden Devine was on third base with Baughman went back up to bat. Baughman began to take base after what appeared to be a ball, but the umpire called a late strike. Baughman made the most out of it with another homerun over left field to score two more runs for Mercer, 7-0.Beasley and Hart couldn’t keep the magic going with a strikeout and ground out to end the high scoring second inning.

Hart was hit in the nose by his own foul ball off the bat, so the game had to be temporarily stopped until he received medical attention. He finished his at bat and prepare to take the mound. Hart went on to pitch three innings with an injured nose before being relieved by Baughman.