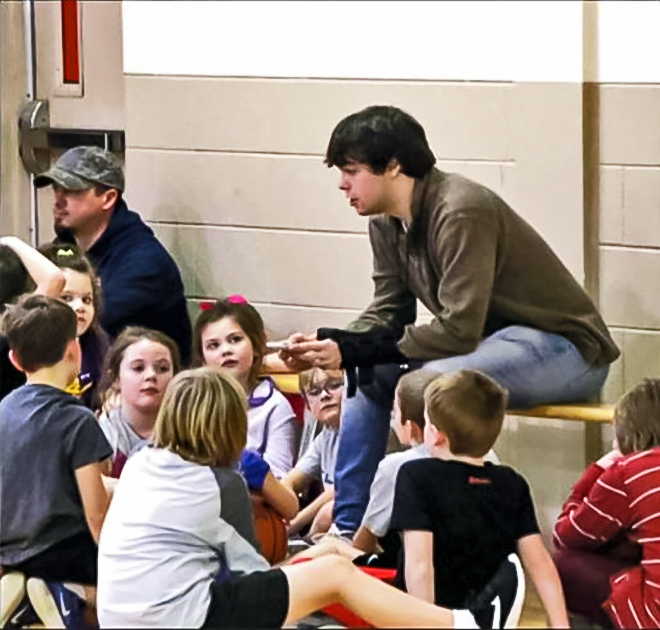 The Harrodsburg Herald – David Carpenter
Coach Trosper Buchanan took time out from basketball practice to share a devotional with his team.

For Trosper Buchanan coaching is something he has been around his whole life. Growing up in the home of a coach, he has fond memories of hanging out with the hundreds of players his dad has coached. He remembers observing closely his father, former Mercer County Titan Football Head Coach David Buchanan, and the relationships he had with the young men who were a part of his football programs.

There were challenges unique to growing up in the home of the head ball coach. He was faced with certain insecurities. Wondering if a teacher or classmate might  have animosity towards him because of an outcome on the football field, is a pressure that he felt much of his life.

In his own home, Buchanan had to learn that his father’s love for him wasn’t conditional on his in game performance. “I thought that if I could score this many baskets or throw this many touchdowns I could be accepted. But that mentality was short lived when I realized at a young age my dad wasn’t proud of me for my success in a sport, but rather my character, gratitude, humility, integrity, and hard work,” he said.

In the summer of 2020 Buchanan was asked by his father to help lead some quarterback work outs. Admittedly, he only took his dad up on the offer for the extra cash it offered. “At first I was just doing it because I was getting paid but over time I really enjoyed watching the kids grow and improve in their mechanics.”