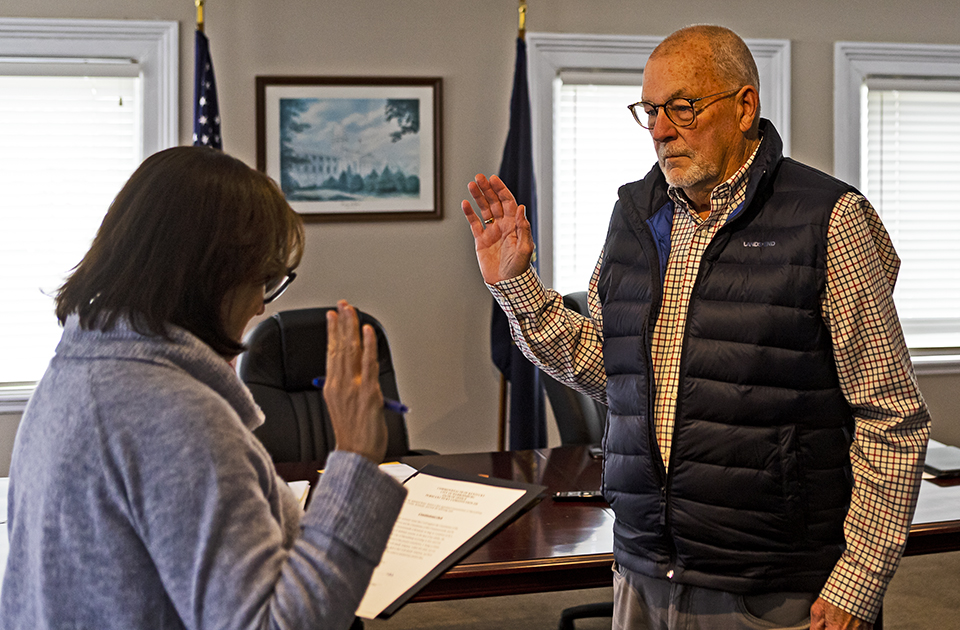 The Harrodsburg Herald/Robert Moore
City Attorney Norrie Currens swears Kerry Anness in as Harrodsburg’s newest city commissioner. Anness will served out the rest of the term of Ruth Ann Bryant, who was forced to resign because of health issues.

The Harrodsburg City Commission has appointed former commissioner Kerry Anness to serve out the remainder of Ruth Ann Bryant’s term. And no, that’s not April Fools.

After an executive session, Mayor Billy Whitenack moved to appoint Anness to the commission, which was seconded by Commissioner Adam Johnson. The motion passed unanimously.

After the vote, Commissioner Jennifer Kazimer explained the three candidates had put the work in to file, which is why the commission didn’t open it up to everyone.

“We’re trying to put the best person in for the next seven to eight months,” Kazimer said.

“We want to make sure you three had the chance to introduce yourself,” Mayor Whitenack said.

Commissioner Marvin “Bubby” Isham said there were opportunities to serve on committees.

At the special-called meeting, the commission also gave first reading to amending ordinance 2021-41, which concerns commissioner departments. The amendment would put Kazimer in charge of the public works department while Anness will oversee the water and wastewater maintenance.

Anness, a retired educator and local businessman, served as a city commissioner 2009-2012. Anness also replaced former Commissioner Jack Coleman when he was forced to resign in 2018 because of an issue with his pension.

Bryant resigned on March 21 due to what she termed “health issues.”

“I am presently in a nursing home and wheelchair and walker bound,” Bryant wrote in a notice that was also sent to the Harrodsburg Herald.

City officials said that, under state law, they had 30 days to appoint Bryant’s replacement or the governor could make the appointment.

The city commission also voted to rescind a motion from the March 28 meeting regarding sale of city-owned property.

At their last regular meeting, the commission voted 3-1 to sell property on College Street to the nonprofit organization Joseph’s Dream at the fair market appraisal of $25,000 in order to install a bronze statue of James Harrod, the founder of Harrodsburg, as well as parking and an informational kiosk. The sale was contingent on Joseph’s Dream acquiring the necessary funding within 120 days. The property would revert to the city if the nonprofit were to dissolve or if they stopped using it for a park.

The city is looking at making it a city park. Currens said the 250th committee has approached the city about other possible uses for the remainder of the lot.