Gaddis said the sheriff’s office is concerned about turnover.

“We have to offer them something,” said Gaddis, who handed the magistrates a proposal that establishes a $56,000 median salary. The proposal includes tiers based on years of service.

Gaddis noted other departments were actively recruiting. The sheriff’s currently offers new deputies a three year contract, after that deputies are free agents.

“I felt like this was a reasonable amount based on our size,” Gaddis said.

“We are very self-sufficient in our office,” said Gaddis, who noted the sheriff’s office handles everything from major crimes to accidents. He said they had handled 5,500 calls in 2020. That umber only includes 911 calls, not calls made directly to Sheriff Kelty, the deputies and walk-ins. 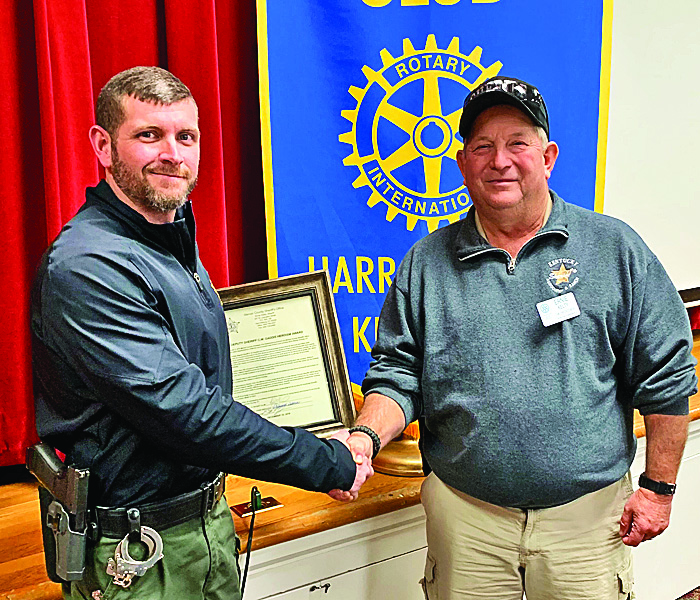 Gaddis said he got the information online and by contacting the Kentucky Association of Counties as well as other departments. He said other departments are aggressively seeking to poach experienced officers from other localities.

“I can answer one call right now and make $10 more per hour,” Gaddis said.
The deputies have to cover a lot of ground, including 300 miles of county roads and 390 miles of states roads. Sheriff Kelty said it wouldn’t be possible without the assistance they receive from the Harrodsburg Police Department and the Kentucky State Police.

“We have to have that kind of assistance because there’s not a department in this state that’s not understaffed,” Kelty said.

In addition to law enforcement, court security and emergency services, the sheriff’s office also handles property tax collection, taking in more than $16 million last year, which was distributed to local taxing districts as well as county and state government, as well as vehicle inspections.

“If you don’t know who to go to, come to the sheriff’s office,” Kelty said.

There are currently eight full-time deputies, as well as one part-time officer. They have a deputy who is just about to graduate from the state police academy. Kelty said his office invests more than $30,000 in training, including 20 weeks of police academy, which is what makes experienced law enforcement officers so attractive to localities.

Kelty said his office lost one deputy in the 11 years he’s been sheriff. In the last three months, he said they lost their chief deputy—Scott Elder left the county to become chief of the Burgin Police Department— and night shift supervisor. Kelty said former deputy Matt Swabey had 14 years of experience. Swabey left for a job offering him $16,000 more than what Mercer was offering. While the sheriff’s office did succeed in hiring Bobby Hartman away from the HPD, Hartman has seven years of experience versus Swabey’s 14 years.

“We lost out,” Kelty said. “The sheriff’s office cannot afford to lose people like that.”

“I’m asking you all to absorb it because I do not have it” Kelty said.

“The thing that scares me the most is the number of people we’re going to have retire,” said Mercer County Attorney Ted Dean. He said the sheriff’s office could lose five officers over the next several years.

“There is no substitute for experience,” Dean said. “Y’all need to keep the retirement issue in mind. He’s going to lose half his department before his next term is over.”