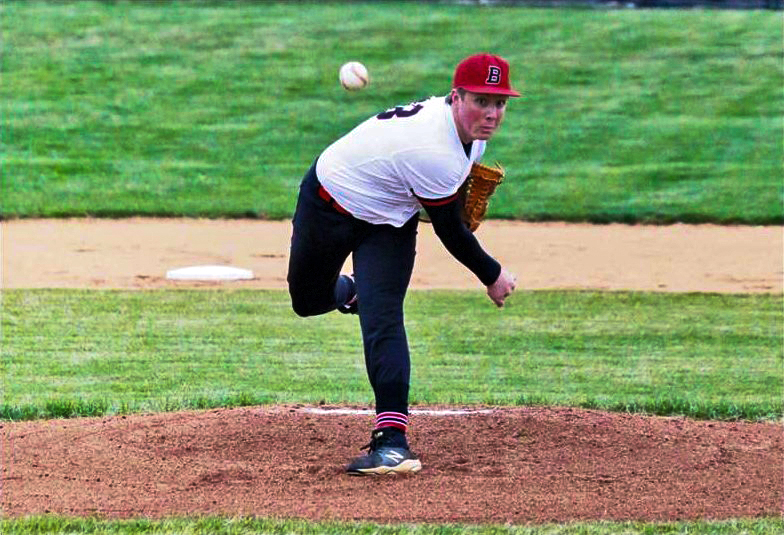 The Harrodsburg Herald/April Ellis
Junior Noah Broce painted the corners against the Eminence Warriors on March 25, earning eight strikeouts to secure a 6-2 victory.

Noah Broce took the win for the Bulldogs only surrendering two runs on two hits over four and two-thirds innings. He struck out eight batters. Hunter Reed threw one-third of an inning coming in as the relief pitcher. Eli Newby and J.T. Boswell lead with one hit each.

Broce made a quick inning taking Eminence’s first three batters down. Burgin’s bats struggled in the cold with Jacob Qualls flying out, Reed striking out and Broce also flying out.

In the top of the second, the Warriors took base due to an error. The second batter was out when Broce connected to first baseman Aaron May for the out. The wind played havoc with Burgin’s outfield and another base runner got on due to an error. Broce struck out the next batter to gain the second out and Eminence got their first point after a single to the short stop, 0-1. One more runner took base from a walk and Broce struck out the next batter for the third out.

In the bottom of the second, Newby singled on a line drive and May followed him on base due to an error. David Lynn was walked to load the bases for Burgin. Newby was out running to home when Landon Oaks grounded into a fielders choice for the first out. The bases were still loaded when Boswell flyed out to the second baseman for the second out. Burgin scored their first run when Landen Sexton was walked sending Oaks home, 1-1. The Bulldogs scored again when Qualls hit a ground ball that Eminence couldn’t handle and Lynn made it home for the lead, 2-1.

Reed ended the inning with a strikeout.