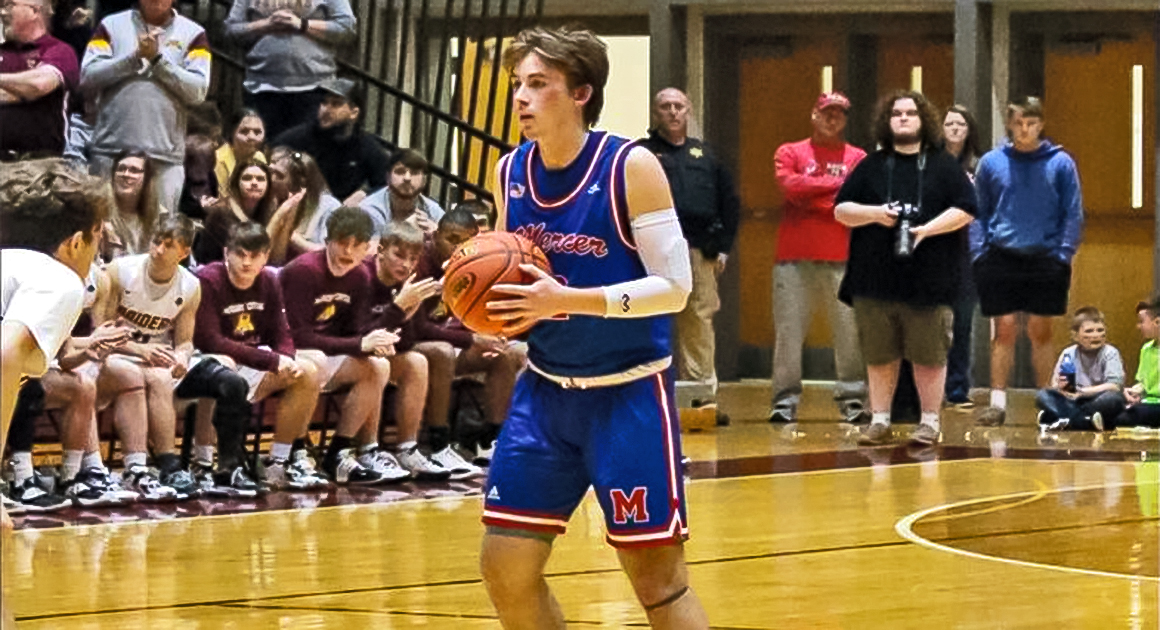 The Harrodsburg Herald/April Ellis
Sam Baughman started out hot for the Titans with nine quick points in the first half, but Mercer couldn’t keep up with the Raiders in the second half after being up by 12 as late as the third quarter.

The Mercer County boys basketball team (16-14) lost a double overtime slugfest to the McCreary Central Raiders, 50-53, in the first round of the 12th Region tournament Wednesday, March 2. The Titans season comes to an end, but not without a fight especially from standout freshman Trevor Eliis who lead his team in scoring and rebounds with 14 each.

The Titans were on the board first with senior Sam Baughman scoring off a running floater in the paint that was quickly canceled out by a Raider layup, 2-2. AJ Wearren made back-to-back great defensive plays, drawing a charge in the paint and getting a steal, but the Titans couldn’t come away with any points on either possession. McCreary Central took a short two point lead off a layup that was canceled out by a smooth spin move in the paint by Baughman, 4-4.

At the halfway mark in the first quarter the Raiders added two more points with a layup and Ellis with a good effort play dove for a loose ball that turned into two free throws for Wearren on the other end of the court, 6-6. McCreary took the lead with two layups using good ball movement to get past Mercer’s bigs, 6-10. The first quarter came to end with Baughman getting his third basket with an up and under layup past two Raiders defenders, 8-10.

Mercer started the second quarter with Ellis getting a stop at the rim and Baughman making a nice dish to Evan Hart under the basket to tie the game again, 10-10. Mercer took the lead when Seth Caton got a steal and Wearren cashed in with an easy layup, 12-10. Wearren took another charge to earn the Titans a possession that ended in two points from Caton, who slipped behind the Raiders for an easy layup with Hart getting the assist, 14-10.

Wearren kept up the great defense with a steal and found Ellis trailing for the two points in transition. Ellis was fouled, but missed the free throw to give the Titans a six point lead, 16-10. With four minutes left in the second quarter, McCreary Central scored their first points with a baseline jumper for two points, 16-12. Baughman knocked down the first shot behind the arc for both teams with an assist by Caton, 19-12.