Mercer cruises by Pulaski in first round of Region 12 Action 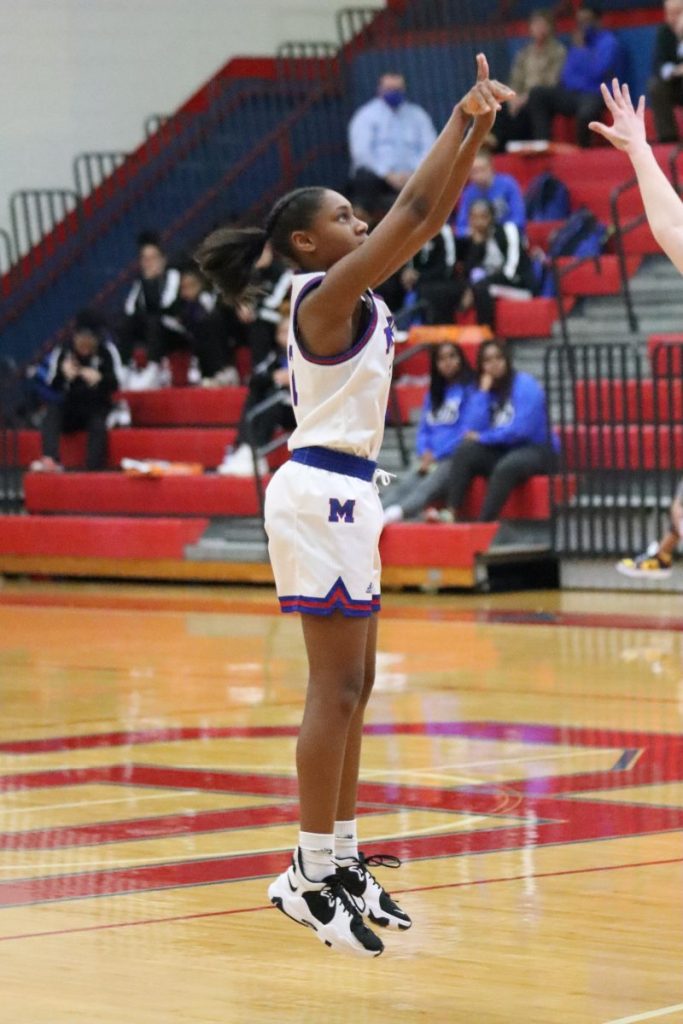 The Harrodsburg Herald / Wesley Bird. Teigh Yeast added 18 points for the Titans, including 3/5 from distance.

The Mercer County Titans girls basketball team (23-7) advanced to the second round of the 12th Region tournament after beating the Pulaski County Lady Maroons (21-10), 65-53, Tuesday, March 1. The Titans had a trio of scoring from Timberlynn Yeast with 19, her sister Teigh Yeast with 18 and Lindsay Jessie with 15.

The Maroons were first on the scoreboard with a three from Maggie Holt who finished the game with seven 3-pointers, 0-3. Timberlynn Yeast scored Mercer’s first points with 5:30 left in the first quarter after she got her own rebound and a putback, 2-3. Timberlynn Yeast made a great defensive play blocking a shot in the paint, but Pulaski was able to come away with two points on the possession, 2-5.

Mercer cut the deficit to one with Anna Kate Drakeford making a dish to Timberlynn Yeast in the paint for a short shot, 4-5. Pulaski split a pair of free throws and Holt hit another 3-pointer to extend their lead 4-9. Drakeford with another dish in the paint found Jessie for the 2-point shot in the paint, 6-9.

Mercer cut the Maroons lead to one with Jessie getting a steal and assist with a pass to Timberlynn Yeast for a layup in transition, 8-9. The first quarter ended with Pulaski up by one with the last minute of play including two free throws from the Lady Maroons and Jessie hitting a running floater, 10-11.

The Titans took their first lead of the game to open the second quarter with Jessie getting fouled on a layup and Drakeford tallying another assist, 12-11. Teigh Yeast took the ball full court and scored at the basket with a smooth Euro step, but Holt hit another 3-pointer to tie the game, 14-14. The teams traded deep shots with Holt making one for Pulaski and Sara Dunn answering for Mercer, 17-17.

Drakeford broke the tie with an uncontested layup, but Holt was lights out from behind the arc with another 3-pointer, 19-20. Timberlynn Yeast controlled the paint with another strong layup and Drakeford added two free throws the next possession to give the Titans some breathing room, 23-20. Teigh Yeast extended Mercer’s lead with a 3-pointer followed by a steal and layup for a quick five points, 28-20.

The Titans lead was pushed to double digits after Jessie was fouled on a baseline shot and made her free throw, 31-20. Pulaski had their own basket and foul for a three point play to finish the first half with the Titans out in front, 31-23.

The Titans took some time to get started, but after weathering the storm of Holt’s hot shooting they were off to the races, scoring in transition and Timberlynn Yeast putting in work around the rim.

The second half kicked off with Jessie getting fouled in the paint and sinking both shots, but Pulaski scored with a putback shot, 33-25. Drakeford found Teigh Yeast for her second triple of the game and the next possession Jessie connected on a mid-range jumper to give the Titans a 13 point lead, 38-25. Teigh Yeast cashed in again behind the arc followed by the Lady Maroons hitting their own 3-pointer, 41-28.

Pulaski scored the next four points off of two free throws and a layup, but Timberlynn Yeast kept Mercer’s lead at 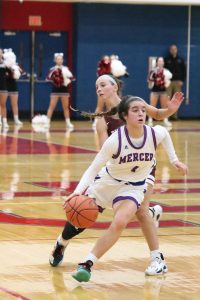 Mercer’s Anna Kate Drakeford dribbled past the Maroons press defense. Drakeford also went 7-9 from the line for the Titans, and assisted in holding onto the lead in the fourth quarter.

11 points after hitting two free throws, 43-32. The last two minutes of the third quarter went the Maroons’ way with five points from a layup and a 3-pointer while the Titans scored two points from a Timberlynn Yeast layup, 45-37.

The fourth quarter started quickly with Holt hitting another 3-pointer and Pulaski’s zone defense getting a steal that turned into another two points closing the gap to three points, 45-42. Timberlynn Yeast raced past the full court press from the Maroons for a short floater in the paint which were the only points scored by Mercer not from the free throw line in the quarter, 47-42.

The Titans had entered in the bonus as Pulaski turned the last six minutes of the game into a free throw contest for the Titans. Mercer went to the line for 27 shots and made 18 of them. Drakeford and the Yeast sisters made five each, Jessie made two and Dunn added one more. The Lady Maroons scored 14 points in the fourth quarter, but Mercer held a confident lead the whole time with Drakeford and the Yeast sisters fighting Pulaski’s full court press while Dunn and Jessie held strong with defense and rebounding in the paint.

The game ended with Mercer on top by 12 points, 65-53, and a punched ticket to the second round of the 12th Region tournament. The Titans face their biggest test of the season with everything on the line in a rematch with the top team in the 12th Region, the Danville Lady Admirals (27-4). The two teams played earlier this year with Danville taking the win, 64-49, but Mercer was without Drakeford at the time.

The Mercer and Danville game is shaping up to be the game of the tournament and is set to be played Friday, March 4, at 8:15 p.m. at Lincoln County High school.