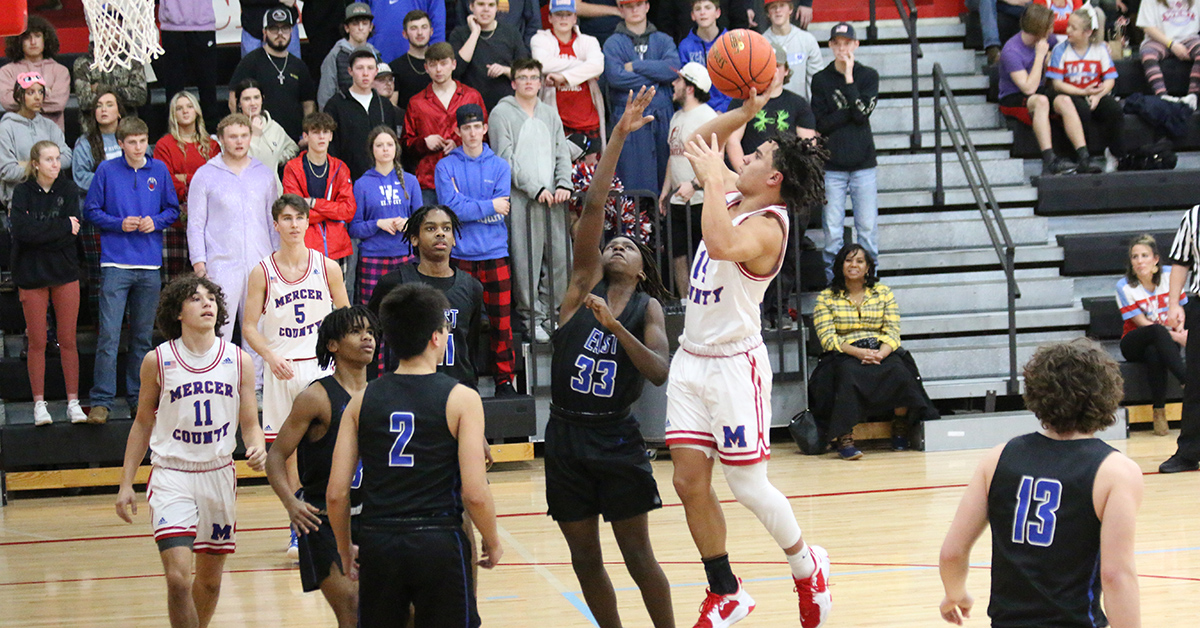 The Mercer County Titans boys basketball team  (16-12) got their vengeance last night on the East Jessamine Jaguars (4-26) in a 57-33 win during the first round of 46th district play being held at West Jessamine High School. Last year, the Titans fought back in the second half from a six point deficit to get a nine point lead with 2:29 left to play, to only have the Jaguars come back and win by two.

Mercer played well, with unselfish passes and good defense. They had four players score in double digits and it’s that kind of play they will need to advance through the region tournament.

The game started with both teams pumped and ready to play, knowing a loss ended the season. Both teams had multiple turnovers from passes that were a little too hard and a little too fast. Once, their nerves settled the scoring got underway.

Junior Evan Hart started it off for Mercer by powering through with an offensive putback. Freshman Trevor Ellis followed up with his own strong move through the middle with an assist by junior Seth Caton.

Senior Sam Baughman worried East’s guards and ended up with the steal, but was fouled at the basket and the Titan crowd wanted, but didn’t get, the intentional foul call.

Hart and Ellis continued to punish at the boards and Caton showed some sneaky athleticism as he tip toed the baseline to keep the ball in play. It paid off when junior AJ Wearren hit the 3-point shot to extend the Titans’ lead, 11-5.

Ellis found Caton as he rolled to the basket. On the next trip down the floor, Hart took the charge and seemed to enjoy the taunting from East’s student section. Baughman drained a 3-point shot and with seconds left in the first quarter, Wearren let one go as well, but it circled the basket twice and popped out. The Titans led 16-10 at the end of the first quarter.

East began to creep back on Mercer  cutting it to a four point game, 20-16. Hart sank a jumper from the foul line with the assist to Wearren. Mercer worked the passes from the perimeter to inside and back out again, patiently waiting for the open shot. It paid off when Hart caught Caton on the baseline for the layup. East’s Hayden Frazier hit another 3-point shot to end the half and the Titans remained in the lead, 24-19.

Coming out of halftime, Frazier hit another 3-point shot and East tied the game, 24-24. Caton dropped a 15-footer and Wearren hit one of two from the free throw line. The Titans picked up momentum when Ellis knocked a ball loose from his man and was then fouled on his shot. He hit both shots from the charity stripe, followed up with another basket and Mercer was back in the lead, 31-24.

Hart added two more foul shots and Baughman sank another 3-pointer and Mercer took its first double digit lead, 36-25 with 1:45 left to play in the third. The remainder of the quarter, the Titans pulled back closer to the half court line and again patiently worked the pass until Hart was open and scored, 40-30.

Senior Aaron Caton snagged a big rebound and fed Baughman for the floater. Ellis knocked another ball loose and S. Caton picked it up, but was fouled at the basket. He hit one of two shots, 43-30. The Titans continued with good ball movement and Wearren found Ellis with the mismatch under the basket for the power dribble and dunk.

In last year’s game, Mercer struggled from the foul line in the final minutes. However, when Mercer found themselves in the bonus this year, they hit five of six shots. S. Caton snuck in under the basket on an out of bounds play and senior Brayden Dunn wrapped up the Titan’s scoring with back-to-back drives.

The Titans redeemed themselves with a district win over East Jessamine, 57-33.

They play for the 46th district championship against the West Jessamine Colts (18-12) Friday, Feb. 25, at 7 p.m. at West Jessamine.