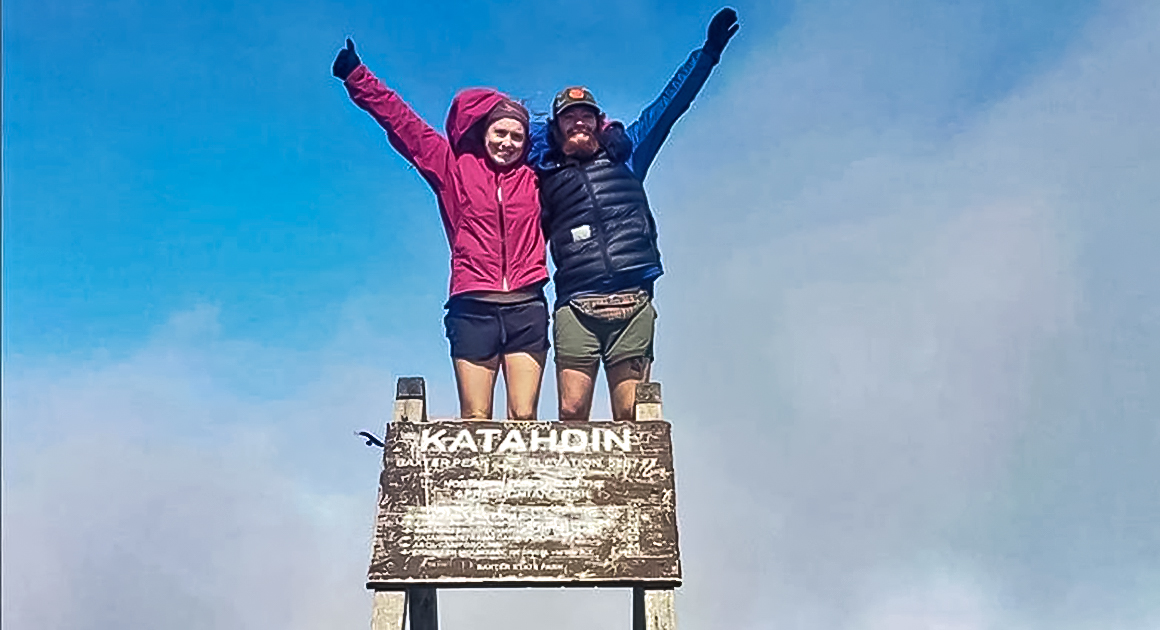 Photo Submitted
Savannah and Garrett Anderson celebrated at the summit of Mount Katahdin, Maine’s highest mountain at 5,269 feet, during their 2019 hike of the Appalachian Trail.

To most it may seem strange to one day wake up and say “Hey, let’s hike 14 states,” but to Garrett and Savannah Anderson, it was a walk in the park. The couple completed the Appalachian National Scenic Trail, referred to as the AT by hiking enthusiasts, in September 2019.  The AT is approximately 2,192 miles and passes through most of the states on the east coast, starting in Georgia and ending in Maine. It took the Andersons exactly 200 days to hike it. 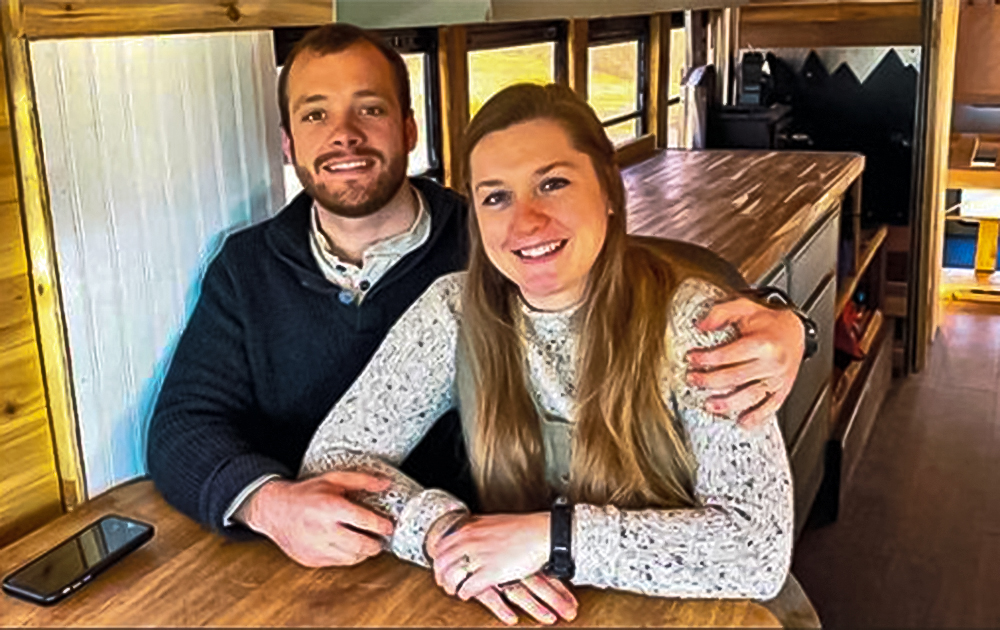 The Harrodsburg Herald/April Ellis
Garrett and Savannah Anderson take a break from remodeling and training for their attempt to hike the Pacific Coast Trail in March.

The couple, who like to travel and live a minimalist lifestyle, were actually staying in a hostel in Europe when a conversation with a friend sparked the idea. Once back in the states, the couple started their trek in early March, so they could be done before bad weather hit the northern states in October.

The Anderson’s jumped in with both feet on the AT trail and while they planned their gear and path, they didn’t really prepare their bodies for over 2,000 miles on rough terrain.

“We didn’t train going into it and it was really, really hard,” joked Savannah. “I definitely wouldn’t suggest doing that.”

The couple started out  hiking and camping in four day intervals and would stop to resupply and stay at hotels along the way. Eventually, they would hike up to nine days without going into a town, covering 15 to 20 miles a day. As if the hiking wasn’t challenge enough, the couple did this just six months after being married.

“We considered it an extended honeymoon,” said Savannah. “It forced us to learn communication skills real quick.”

“She carried the fuel and I carried the cooktop, so we had to make up by the end of the day or neither of us would eat,” joked Garrett.

Once back in the real world, with real jobs, the couple missed their life surrounded by nature and began to 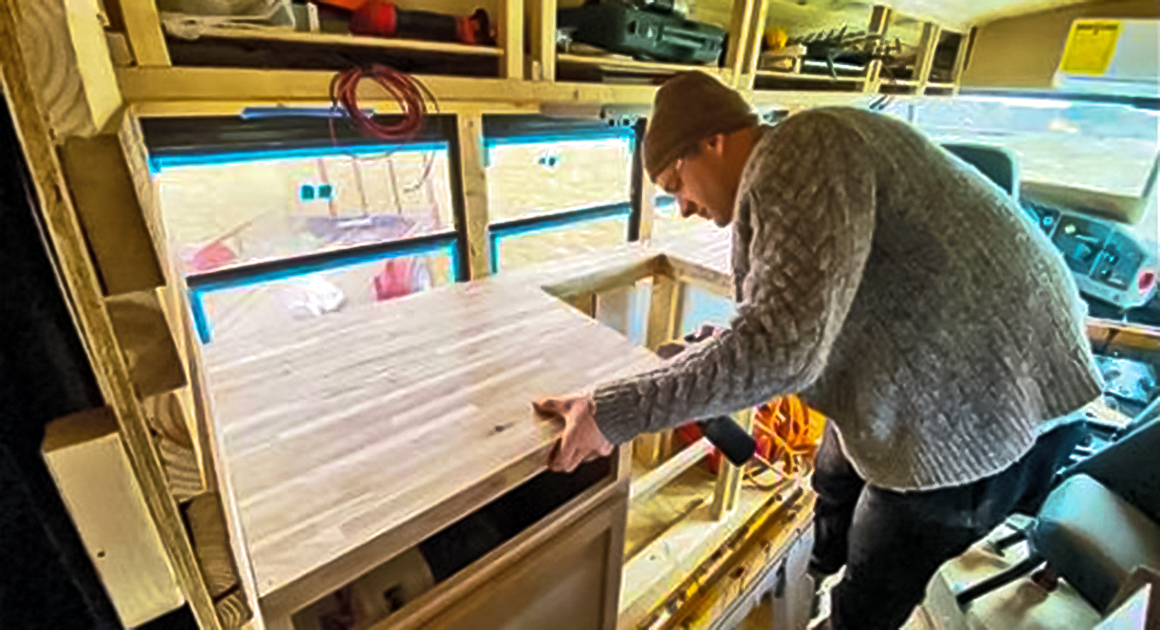 The Harrodsburg Herald/April Ellis
Garrett Anderson added butcher block countertops he and his wife Savannah are converting to a home for a simple lifestyle on the road.

plan on how to make their chosen lifestyle more long term.

“We would work and save like crazy and then we would travel and then start saving all over again,” said Savannah. “We want to mesh our lifestyle with our finances.”

So in November 2019, the couple purchased a school bus, which they have been converting into a rolling home. Neither were overly confident with their carpentry skills at the start, but experience and YouTube videos has helped them transform their school bus into an inviting home complete, with an oven for Savannah’s baking and shelves for Garrett’s book collection.

With the shift to remote offices that COVID-19 forced on several businesses, the duo hope to find careers that will allow them to work from their nearly completed  home. They are pushing to have everything finished on their bus by early March when they head out on their next adventure, the Pacific Crest Trail (PCT). After conquering the East coast, they have their sights set on the West coast.

The PCT  is 2,653 miles long and crosses through California, Oregon and Washington on the Cascade and Sierra Nevada mountain ranges. It is one of three trails that make up the Triple Crown of Hiking, along with the AT and Continental Divide Trail. On this hike, the Andersons will get to experience snow hiking and camping in the High Sierras, which averages between 172 to 271 inches of snow per year, depending on the elevation.

This time they are working to better prepare and have been training in the gym with strength training and stretching, along with hitting the treadmill while carrying their 20 pound plus backpacks.

“We are training a lot more this time,” said Savannah. “It will make it so much easier and hopefully prevent an injury. We were so lucky on the AT that neither of us were hurt.”

“We have really worked on stretching and it’s something we didn’t do last time,” said Garrett.

The Andersons will have two of the 5,000 permits issued each year to those hiking the PCT. They look forward to being back in nature and meeting hikers along the way. They sometimes would hike a few days in solitude on the AT, but other days they would cross paths with up to 100 hikers.

The couple encourage others who are interested in hiking to try the app All Trails, which helped them discover several local trails they are using for training and videos and tips available on REI, the hiking gear retailer’s website.

“I just think it’s cool to have everything you own in the backpack you’re carrying,” said Garrett. “This is the life we want to lead and we are figuring out how to do it.”