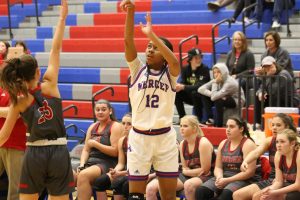 The Harrodsburg Herald/Wesley Bird Timberlynn Yeast takes the outside shot in Mercer and Burgin’s inter-county match-up Tuesday, Feb. 8. The Titan’s win over the Bulldogs increased their win streak over district opponents to 86 in a row.

The Mercer County Titans girls basketball team added to their six game win streak on senior night coasting by the Rockcastle Lady Rockets, 68-38, Friday, Feb. 11. The Lady Titans had the first game of the double header and between games they celebrated their one senior player, Marley Ellis, and two team managers: Gabby Mays  and Lauren Brown.

The Lady Rockets were first on the scoreboard with a basket in the paint to start the game, but the Titans answered on their first possession with a pick and roll from Lindsay Jessie and Anna Kate Drakeford, 2-2. After another Rockcastle 2-pointer, Drakeford found Jessie again for a layup tying the game back up, 4-4.

Mercer’s defense forced Rockcastle to over a two minute long possession ending in Ellis getting the defensive rebound and Drakeford getting her third assist in three trips down the court finding Teigh Yeast in transition for a layup, 6-4. The Titans stayed aggressive with Teigh Yeast getting a steal and taking it to the basket for two points, 8-6.

Drakeford attacked the basket with a spin move, but missed the shot and was fouled after getting her own rebound, she split her free throws, 9-6. The Yeast sisters have a connection on inbound plays under the basket which have been more successful than not as they came away with an easy layup for Timberlynn Yeast, 11-6.

After a timeout from the Lady Rockets, the Titans forced a turnover in the back court and Timberlynn Yeast was fouled in the paint, she made both shots to put Mercer up, 13-6. Rockcastle knocked down a long 2-pointer followed by Sara Dunn going to the line for two shots and making both, 15-8.

The fouls kept coming with the Lady Rockets missing their free throws and Timberlynn Yeast making both of hers, 17-8. The last minute of the first quarter included a layup form the Rockets answered with Dunn earning two points in the paint, but Rockcastle hit a 3-pointer at the buzzer to cut Mercer’s lead to six, 19-13.

The Titans continued to find holes in the Rockets defense with Timberlynn Yeast slipping behind them for the layup and Jersey McGinnis notching the assist, 21-13. Mercer continued to pour it on with Drakeford and Timberlynn Yeast getting back-to-back layups, while Rockcastle struggled to keep up offensively, 25-13.