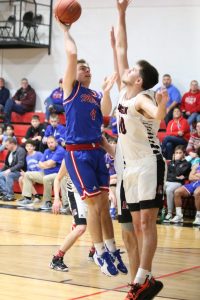 The Harrodsburg Herald/Wesley Bird
Senior Aaron Caton goes over Greyson Mitchell for the basket on his way to 11 points Saturday, Feb. 12.

Qualls snagged the tip off, but Mercer senior Sam Baughman immediately put on the defensive pressure. Baughman stole the ball and fed it to Ellis who was fouled at the basket. Ellis went one for two at the foul line.

Mercer’s post play continued to be a strength. Junior Evan Hart pulled down a rebound with a good pass to Ellis for the assist, 3-0.

Burgin Assistant Coach Dennis Berry, who lead the team for Head Coach Troy Lee Thomas, called a time out, to settle his team. Sophomore Seth Hatfield was able to shake his defender loose and hit the jumper for Burgin’s first basket of the game.

Baughman continued his defensive pressure and forced another Burgin turnover and finished with a basket, 5-2.

Both teams committed early to a physical, full court game. Burgin had to fight for every shot against Mercer’s defense, but Qualls worked to get the 3-point shot off, followed by Hatfield for the trey and the game was tied, 8-8.

Mercer scored on an out of bounds play when junior Seth Caton found Ellis cutting to the basket and converted it to three points with the and one foul shot, 11-8….