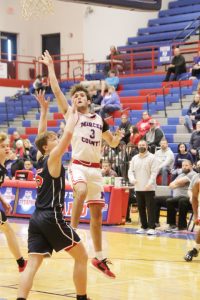 The Harrodsburg Herald/April Ellis
Junior Seth Caton sinks the floater against the neighboring Anderson County Bearcats. Caton finished with 10 points and five rebounds to be named player of the game for the first set of games in the Mingua Beef Jerky Prep Spin Classic.

Junior Seth Caton was named most valuable player of the game with 10 points and five rebounds.

Junior AJ Wearren put the Titans in the right direction scoring in the opening seconds of the second quarter. Caton and sophomore Thaddeus Mays clamped down on Anderson in the back court and forced them to take a time out before the 10 second call. Mays may have only had four points for the game, but he provided a defensive spark for the team.

At the 5:16 mark of the second quarter, Wearren tied the game, 7-7, after scoring off a drive and making the and one shot. Caton followed with his own drive, with an assist from Donavan Wright, 9-7, and the Titans took the lead.

Mays stepped back from behind the line and sank a 3-pointer, 12-7 and Anderson’s Alex Walker answered back with one for the Bearcats.

The Titans struggled on the boards, which has been a strength for most of the season.

With less than two minutes in the half, senior Sam Baughman was fouled on the 3-point shot and he went one for three from the charity stripe…