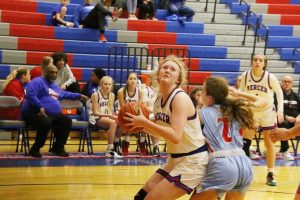 The Harrodsburg Herald/Wesley Bird
Lindsay Jessie gets the rebound and putback over the Colts. She finished with 16 points, five rebounds and two assist Tuesday, Feb. 1.

The Mercer County Titans girls basketball team defeated the West Jessamine Colts, 62-39, Tuesday, Feb 1. This was the second matchup between the district opponents with Mercer beating the Colts, 66-44, the week before to continue their sweep of the 46th district.

Junior Timberlynn Yeast was the first on the scoreboard, stealing the ball after West came down with a rebound and turning it into a quick two points, 2-0. West split a pair of free throws on the other end of the court, 2-1. Teigh Yeast made the Colts pay with a steal and breakaway lay up to put the Titans up, 4-1.

The Colts zone defense kept Mercer from their usual game plan of driving to the basket and forced more ball movement, slowing the pace of the game and creating turnovers. Lindsay Jessie made a good move to get behind the West defense and Timberlynn Yeast found her with a good pass and better finish, 6-1.

Mercer’s turnover looked like an easy basket for the Colts, but Anna Kate Drakeford with good hustle was able to close the gap and get a big block without fouling, 6-3. Drakeford was fouled in the paint on the Titans next possession and hit both of her free throws, 8-3. West had back to back steals and capitalized scoring twice in the paint….