Actually, this was my first rodeo. 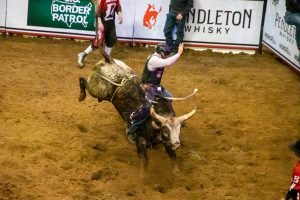 Sports are typically thought of as a game played on a court or field with a ball in a jersey or a competition on a track, but not all sports are typical. Professional Bull Riders (PBR) made its return to the Bluegrass state putting on a show like no other in front of a packed Rupp arena crowd on Saturday, Feb. 5.

Bull riding is unlike any other sport because it’s not competition between people, but a battle pitted between a one ton Bull and a few brave men that fit the bill of a cowboy better than anyone else. These cowboys and bulls lit up the dirt stage with 50 rides under the arena lights with grace and athleticism.

Bryan Titman is an 11 year veteran of the rodeo who played baseball and football in high school, even receiving a scholarship to play wide receiver at Texas Christian University, but was set on being a pro bull rider. Like many others in the business he works cattle during the week at home. His preparation and training includes cardio and core exercises along with a machine called a drop barrel that mimics the bucking motion of a bull.

When asked how bull riding compared to other sports Titman’s answer was simple. “It doesn’t.” It’s a true brotherhood as riders cheer for each other to succeed because it’s not them competing against each other, but the riders against the bulls themselves. Titman was quick to show appreciation to his bovine counterparts who he referred to as athletes even saying they were treated better than the riders.

The rules of rodeo aren’t as simple as some believe with all  eight seconds not being equal for starters. Two judges score both the bull and rider on a 25 point scale and then all four scores are added together to get the final score out of a total of 100 points. The bulls are judged on their agility, power and how unpredictable their bucks are. The riders are only scored if they pass the eight second mark at that point the judges look for rhythm and control to match the movement of the bull. In rare cases if the bull has a lack luster outing or hits a fence the judges throw a red flag giving the cowboy an opportunity to take a re-ride if they choose. 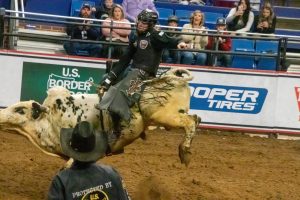 Although Titman’s night didn’t go as planned, being thrown to the dirt early by a bull named Dirty Dog, it was still a high scoring night with 21 out of the 50 rides going past the eight second mark. With 40 riders representing four countries, it was the oldest of the field coming away with the win which the announcers referenced as the  “Tom Brady” of the rodeo world. Thirty nine year old Francisco Morales collected 85 points in the opening round on War Dog and clenched the victory with a best score of 84.5 in the second round on White Lighting to earn the belt buckle trophy.

For anyone considering seeing the show next time PBR returns to Kentucky it’s more than just some guys that call themselves cowboys with questionable decision making skills. It was an exciting production featuring pyrotechnics, athletes both big and small, a cast member from the show “Yellowstone,” prize giveaways and more.

As for the city of Harrodsburg, bull riding and the rodeo has never been a highlight or staple sport we hang our hat on per say, but it’s another opportunity to play a sport and achieve something great. Who knows where the next great bull rider is going to come from, but for anyone interested in getting started Triple Cross Cowboy Church Arena is the best place to start locally and for more information check them out on Facebook at Triplecrosschrucharena. Titman’s advice for any young bull rider out there getting started is something that applies to all sports in a way, “If you can’t beat them in your backyard, you can’t beat them anywhere else.”