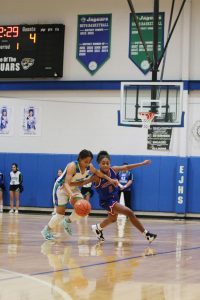 In their last meeting the Titans won by almost 30, but they started off slow this game, before sisters, junior Timberlynn and eighth grader Teigh Yeast combined for 44 of the Titan’s 55 points.

Timber Yeast was fouled in the opening possession of the game and she hit one of one from the free throw line. The Jaguars forced turnovers but couldn’t buy a basket. They went 20/58 for the night, shooting 34.5%.

Timber Yeast hit the shot and the and one, to bring it to a one point game, 4-5. The Jaguars pulled their offense to half court to slow the pace. Teigh Yeast forced the turnover and followed with a 3-point shot to tie the game 7-7 with 1:08 left in the first quarter. Sophomore Anna Kate Drakeford  picked the offense and pushed it down the floor for Teigh Yeast to hit the floater. The Jaguars forced the Titan turnover on an out of bounds play in the final seconds of the quarter and scored on a buzzer beater to take the lead, 11-9.

Drakeford came out with a big block on a 3-point shot, but East recovered the ball and managed to score. East junior Jermyra Christian hit a 3-point shot to extend their lead 16-9, but junior Hope Lanham answered back with her own shot behind the arc.