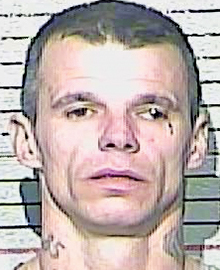 A Mercer County man is being held on charges connected to a string of burglaries in Frankfort. John Edward Hawkins III, 36, of Harrodsburg, is accused of breaking into multiple homes and stealing women’s underwear.

On Jan. 22, detectives from the Franklin County Sheriff’s Office, working in partnership with the Harrodsburg Police Department, arrested Hawkins at his home in Harrodsburg. He is charged with seven counts of 2nd degree burglary.

According to a Facebook post, the arrest is the result of a lengthy investigation into a string of burglaries in the Shady Acres Mobile Home Park in Frankfort.

Investigators suspect Hawkins burglarized multiple homes throughout the summer of 2021. According to the Facebook post, investigators believe Hawkins removed only women’s underwear during the break-ins.

While searching  Hawkins’ home, detectives recovered approximately 100 pairs of women’s underwear and bras believed to have been stolen from residences in Franklin County. He was taken into custody without incident, according to the Facebook post.

Hawkins is being held at Franklin County Regional Jail on a $20,000 bond.

He was scheduled to appear at a preliminary hearing in Franklin County on Tuesday, Feb. 1.

Any victims who did not initially report a crime are asked to contact Detective Farmer of the Franklin County Sheriff’s Office at 502-875-8740.