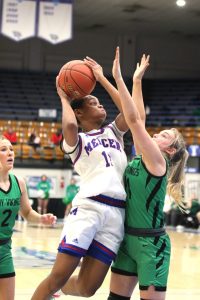 The Harrodsburg Herald/Pam Merchant
Junior Timberlynn Yeast shot over the Viking defender in the Titans loss against Rowan County in the Class 2A state semifinals on Sunday, Jan. 16.

The Mercer County Titans girls basketball team came up short against the Rowan County Vikings (14-6), 47-52, in the semi finals of the 2A state championship Saturday, Jan. 15. Mercer played hard in their second game in two days, but were down five at the half and played them even in the second half.

Rowan County was on the scoreboard first with a short inside shot, but Teigh Yeast quickly answered back with a layup, 2-2. After the Vikings made a triple Lindsay Jessie was fouled in the paint and made both her free throws, 4-5.

The Vikings went on a quick five point run to extend their lead until Jessie corralled an offensive rebound and went right back up for the layup, 6-10. Timberlynn Yeast made a great play out of a defensive rebound to find Anna Kate Drakeford up court for a layup, 8-10. Jessie continued to work in the paint to get a basket and was fouled giving the Titans their first lead after she made her free throw, 11-10.

With two minutes left in the first quarter Timberlynn Yeast got her first points of the game with a dribble drive layup, 13-14. Neither team could get anything to go to finish the quarter with both sides playing tough defensively.