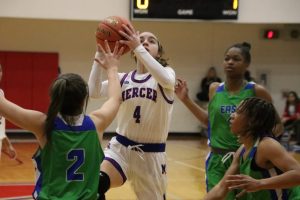 The Mercer County Titans girls basketball team (9-6) faced off against, district opponent, East Jessamine (6-7), Tuesday, Jan. 11, coming with away with a 80-51 win.

The Lady Titans showcased their skill behind the arc with three players hitting three 3-point shots and 10 threes total for the night.

The Lady Titans had their first basket off an inbounds play from eighth grader Teigh Yeast to junior Timber Yeast and junior Jersey McGinnis followed with a 3-point shot. Junior Lindsay Jessie continued her strong post play with four points scored off rebounds and the TItans jumped out 9-7 and forced the Lady Jaguars first time-out.

Anna Kate Drakeford checked in for only her second varsity appearance this season after tearing her ACL in the finals of the 12th region  tournament in 2020. She finished with 14 points for the night.