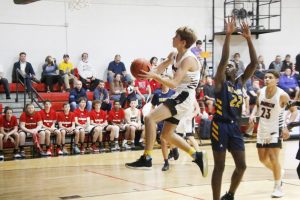 The Harrodsburg Herald/Wesley Bird
Jacobe Taylor elevates past the DCA defender to score in the Bulldogs 21-55 loss on Friday, Dec. 10.

The Warriors’ Noah Imfield made the first shot of the night with a corner three off an inbound pass, 0-3. DCA was quick to double team Senior John Boursaw who led the Bulldogs in scoring last season. On the other end of the court, the Warriors Xavier Oduor found success in the paint with a putback layup and drew a foul, 0-7.

Bulldog Freshman Jeremiah Van De Cruize made a good hustle play to come up with a steal and found Boursaw in the corner for three to get Burgin on the scoreboard, 3-7. After another Oduor layup, Jacob Qualls made his own move in the paint and was fouled on a floater, he made one of two, 4-9.