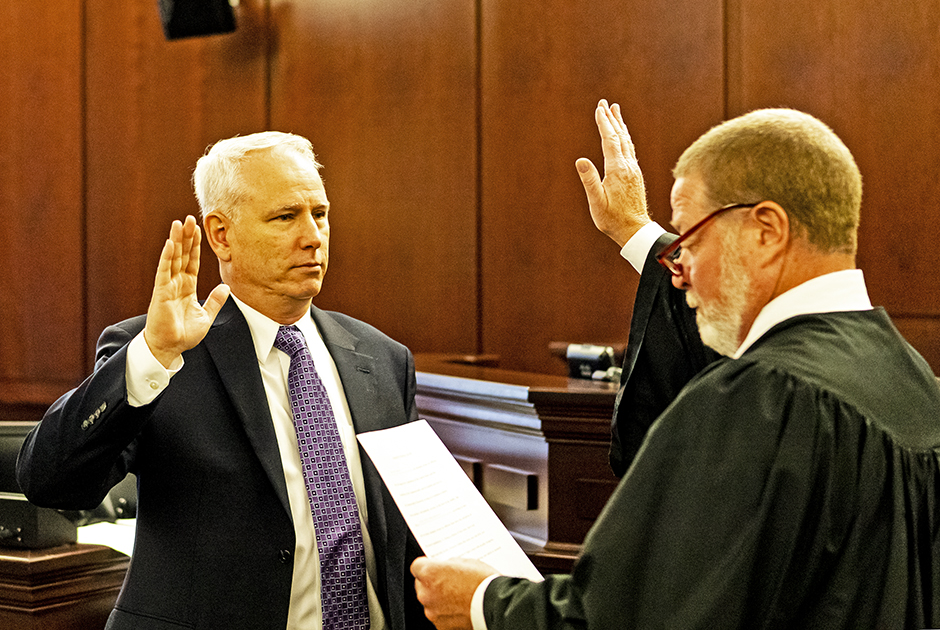 The Harrodsburg Herald/Robert Moore
Former Harrodsburg City Commissioner Scott Moseley was sworn in as Mercer County’s new judge-executive by District Judge Jeff Dotson on Thursday, Nov. 18. Moseley was appointed by the governor to serve out the remainder of former Judge-Executive Milward Dedman’s term.

Scott Moseley is the new judge-executive for Mercer County.

On Thursday, Nov. 18, Gov. Andy Beshear appointed Moseley to serve out the unexpired term of former Judge-Executive Milward Dedman, who resigned Nov. 15 to take a position as deputy director with the Kentucky Infrastructure Authority.

On Thursday, Magistrate Tim Darland, who had been selected by the fiscal court to serve as interim judge-executive until the governor made his appointment, welcomed Moseley. Moseley was sworn in by District Judge Jeff Dotson at 1:15 p.m.

“I’m excited to work with this wonderful group of magistrates,” Moseley told the Harrodsburg Herald. “I’ve got a lot of plans.”

Judge Dedman has spoken of the need to expand infrastructure along the U.S. 127 corridor in order to entice businesses seeking to relocate or open new locations, most recently at a meeting of the Mercer County Sanitation District. Moseley concurred with that assessment.

“We have good, solid infrastructure, we just need to expand on it,” Moseley said. He said expanding water and sewer service beyond the bypass would be costly, but he called it an investment.

“It’s going to cost money, but it’s going to make us money,” Moseley said. “I think it’s going to bring in a lot of opportunities to the county. You show you want growth, you get growth.”

Moseley said he is also looking into expanding broadband throughout the county.

“That’s one of the goals that Judge Dedman had,” Moseley said. “I want to see it through to fruition.”

Moseley stressed the need for positive growth over growth at any cost.

“We certainly don’t want a nuclear toxic plant dumping off sludge,” he said.

Moseley served on the Harrodsburg City Commission, where he oversaw the police, telecommunications and fire departments, for over a decade. He resigned in February 2021 after being promoted to division director over property and casualty with the Kentucky Department of Insurance. Moseley also served as deputy coroner for a long time and said he still helps Mercer Coroner Sonny Ransdell in a special investigative role when he needs assistance.

Moseley has also served as a volunteer firefighter with the Harrodsburg Fire Department and worked as an with EMT with Mercer County Emergency Medical Services. In addition, his father, James Moseley, also served on the city commission.

Moseley said he wants county and cities—not just the incorporated cities of Harrodsburg and Burgin, but Salvisa and Cornishville, among others—to work together.

“What’s good for one is good for everybody,” Moseley said.