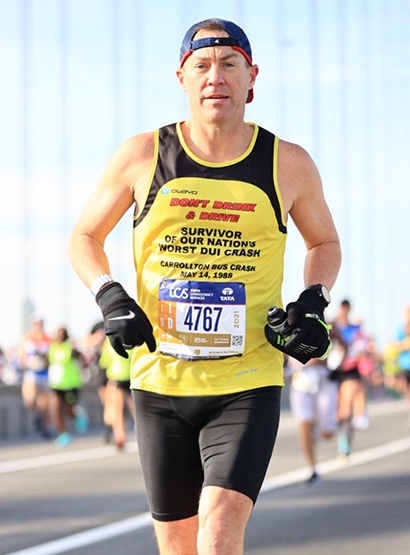 Jason Booher took over as superintendent of the Mercer County School District in August. His professional career has been about being a leader, first as a coach, then assistant principal, principal and now superintendent. Like most good leaders, he has a back story that shaped him, one filled with tragedy, but still inspirational. A story about overcoming obstacles and delivering an important message.

Booher’s message is “don’t drink and drive.” A simple, but important one. He is one of the 40 survivors of the Carrollton bus crash that claimed 27 lives and remains the deadliest drunk driving crash in U.S. history.

Booher takes his message on the road. Not with social media or viral videos, but by competing in the world marathon circuit in New York, Boston, London, Tokyo, Berlin and Chicago. It’s not just about pushing himself to qualify, but sharing his story and honoring the lives lost in the Carrolton bus crash in 1988.

“Running these allow me to reach a very large group of people to share my testimony about the consequences of drinking and driving. It allows me to run with the best in the world while raising awareness for a great cause,” Booher said.

After stepping away from coaching high school basketball for several years, he turned his competitive spirit toward marathon running.

“I like to run as a stress reliever. I wanted to get coaching out of my blood, but I couldn’t get competitiveness out of my blood,” he told Kentucky Alumni Magazine. “I had no more games to coach, so I have this.”