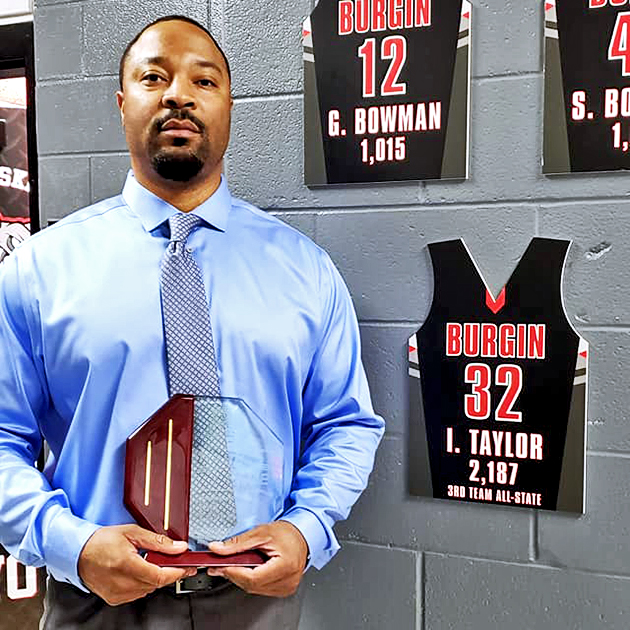 The Burgin Bulldogs’ build-up to the 2021-2022 season began on Thursday, Nov. 11, with Bulldog Madness. This annual community event also included the induction of the inaugural class of the Burgin Independent School Hall of Fame. Its members included former and current Bulldog coaches and administrators, but only one of the inductees was selected solely because of their playing career as a Bulldog. Ish Taylor was a basketball stand out at Burgin from 1996-2000.

Taylor’s vaunted career culminated with third team all state selection, area player of the year and a McDonalds All American honorary mention. Taylor attributes his success to his coaches, teammates and family.

“I had excellent coaching” said Taylor of Burgin Coach Keith Monson. Monson is currently the head coach of the Burgin girls team. “I was surrounded by great teammates. I also had family, friends, teachers and fans in the community who invested their time and effort in many ways to see me become successful and reach my goals.”

He loved his time at Burgin. A five-time all-district team, Taylor player fondly recalls defeating a stacked Harrodsburg High School team in 1997 at home. “It was packed,” Taylor said of the game. “People standing around the court. The fire marshal had to come to monitor just how many people would be in the gym.  It was the best feeling in the world to come out of the locker room and see so many people. The atmosphere was like being at the Boston Garden when they [The Boston Celtics] would play the Lakers in the ’80s.”

After the Bulldogs secured the win, the friendly little city was electric. “I think Burgin celebrated all night,” Taylor recalled. “That was the real beginning of our team being on the map for the next three years.”

As the Bulldogs all-time scorer, Taylor’s legacy is rivaled perhaps only by two time NBA Champion Jack Coleman Sr., who graduated from Burgin in 1946. Yet, as he reflected on his career as a Bulldog it is the community that stands out as the key to Taylor’s legacy.