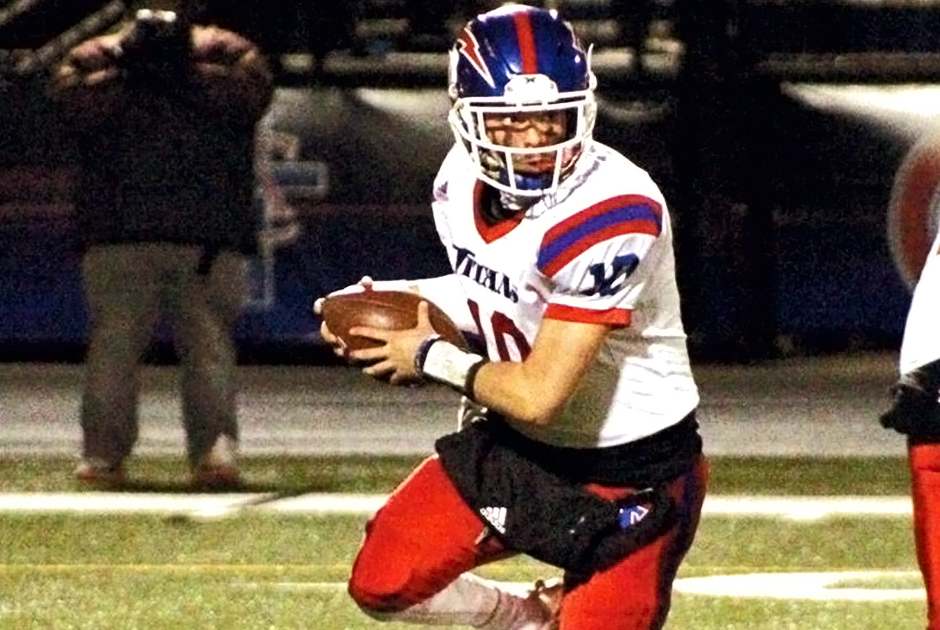 The Harrodsburg Herald/Michael Johnson III
Quarterback Trosper Buchanan competed 12 of 23 passes for 158 yards during the Titans’ losing effort against CAL on Friday, Nov. 12.

The Mercer County Titans football team (9-3) lost, 7-43, to the Christian Academy-Louisville (CAL) Centurions in the second round of the 3A playoffs Friday, Nov. 12.

CAL received the opening kickoff from Mercer’s Beau Brown and after a touch back they started from their own 20 yard line. Jalen Lukitsch made his presence known quickly coming off the edge to make the tackle in the backfield for no gain. The Centurions picked up a first down through the air and slowly worked their way down the field. A bad snap stalled their progress at Mercer’s 30 yard line. The Titans forced a turnover on downs when Lukitsch was able to tip a ball on fourth down.

The Titans started their drive with a quarterback run from Trosper Buchanan who lowered his shoulder to pick up the first down with a 12 yard gain. Mercer picked up another big chunk on a toss to Jackson Peavler, with a great block by Lleyton Penn and a burst of speed, he picked up 22 yards. Jackson Peavler earned another first down with a tough seven yard run to extend the Titans drive.

A pass interference in the end zone on Riley Peavler would net Mercer another 20 yards putting them on the 13 yard line. Lukitsch would pick up seven to get the Titans in scoring position and Brayden Dunn would do the rest with a two yard rushing touchdown, 7-0. Jonah Lewis added on the extra point and finished the year 37 for 40.

The Centurion offense started from their own 29 yard line and picked up a quick 28 yards through the air with two completions. A 29 yard rushing touchdown was taken off the board for CAL after a holding call pushed them back to Mercer’s 44 yard line. They found the end zone the next play with a short screen pass that went for a 44 yard touchdown, but miss the extra point, 7-6.