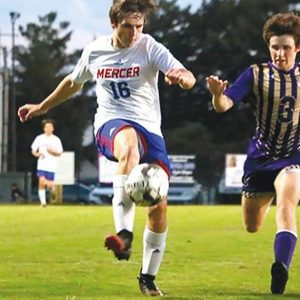 The Mercer County Titans boys soccer team lost 0-1 to the Somerset Briar Jumpers in the first round of the 12th region championship, hosted by Somerset. The game was close and hard fought by both teams as it came down to the second round of penalty kicks to decide a winner.

Somerset had the first shot on goal of the game that was easily handled by Mercer’s keeper Jase Coconaugher (6′). Forte Bess followed it up with a great run down the middle of the field, but couldn’t get a shot off (8′).

Senior Jonah Lewis almost got one to go early with a wide shot that just went over the top of the goal (12′). On the other end of the field, James Johnston made a great stop which is pretty routine for him as he cleared the ball out of scoring position (13′).

Mercer kept the pressure up with a powerful shot from Gavin Wilson that was on goal, but stopped by the Somerset keeper, Landen Lonesky (16′).

Senior Chase Mobley tracked down a goal kick from Coconaugher and kicked it out to Lewis on the corner for another shot on goal that was stopped by Lonesky, but the ball was still in the box as Mobley got a follow up shot off that was stopped by the Briar Jumpers (19′). Bess was right back down in Somerset territory with a big run from mid field, but his shot was just wide left of the goal (21′).

The Titans captains Beau Brown and Johnston kept the Briar Jumpers frustrated on offense as they could rarely get around the two or get off quality shots.

A Somerset foul gave Mercer an opportunity to score as Johnston put the free kick in the box and Bess found it for a nice header, but Lonesky made the save to keep the game scoreless (29′).

The Titans created another good shot with their ball movement in the middle of the field and found Wilson for a deep kick that went just over the top of goal (35′).