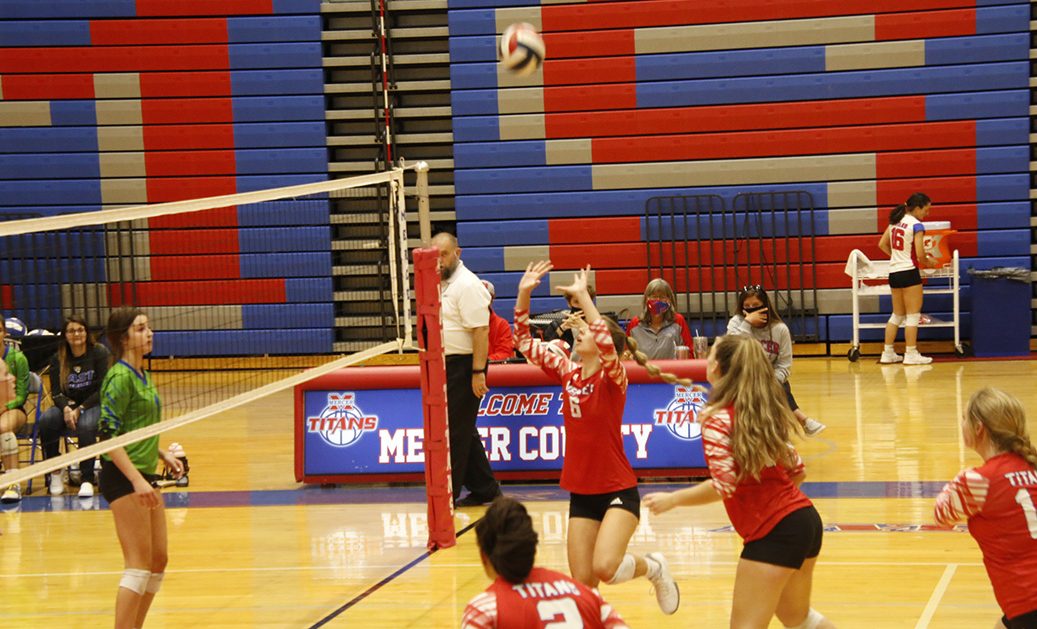 The Mercer Titans volleyball pulled off a big upset Monday night in 12th region tournament play defeating the East Jessamine Jaguars in three straight sets. The Jaguars had beaten the Titans twice in the regular season, but the Titans got the win when it mattered most, tournament time.

“I think our experience kind of overpowered them,” said Head Volleyball Coach Lynn Flach. “They’ve beaten us twice this year, but both times I’ve not had my six starters, so tonight was the first time I was fully loaded going against them. We played well, we still had some errors we need to clean up and our fan section was phenomenal. They played a huge part in the mental aspect of taking East out of their game.”

Senior Haven Six, a strong server for Mercer, opened up serving and the battle began. Senior  Elle Prewitt and junior Jai Piazza were strong at the net and kept the score neck and neck. A miscommunication by the Titans front line lets a ball fall and East took a two point lead 8-6.

East started to creep ahead, 15-11, but an ace by senior Jamesyn White started to close the gap, 15-12. A hard spike by Piazza cut it to one, 15-14. After some mishandles by both sides the  score was tied, 18-18. Each volley felt crucial as East would gain a point and the Titans would fight back. White had a key ace and tied it, 23-23. Piazza tied the game again at 24 with a hard spike. East struggled to keep the ball in the lines and the Titans were there to take advantage to win the first set, 26-24.