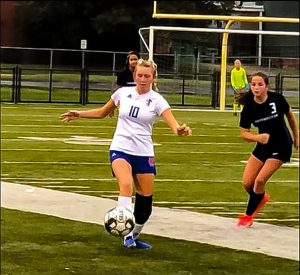 The Harrodsburg Herald/Stacy Davis
Mercer senior Annie Pendygraft cleared the ball from Southwestern during the second round of 12th region play last Wednesday.

The Mercer County Lady Titans lost in a 0-1 double overtime heart breaker against the Southwestern Lady Warriors last Wednesday, Oct. 13, in the second round of region play.

The Lady Titans were ready to advance to the championship game after defeating the Boyle County Lady Rebels Tuesday night. This was the first match up of the season between the Lady Titans and Lady Warriors and the first half was evenly matched.

The Lady Warriors were missing one of their leading scorers, Rebekah Clark, who was lost to injury during the quarterfinal match-up against Pulaski County. Lady Titan Laykin Irvin was missing from the game due to an ankle injury she suffered during the first few minutes of the Boyle County game.

Southwestern got some early shots on goal by Kelsey Miller (5′ and 6′), but both were missed and Corrine Souders, Southwestern’s leading scorer, had a shot on goal in the 13th minute, but Mercer goalie Ryleigh Sipe was there to cover the ball.

Lady Titans’ senior Marlie Charles was able to make an early run, but was unsuccessful and stopped by the Lady Warrior defense. Southwestern kept the Titans defense busy during the first half. Maddie Angel worked hard to clear a couple of shots in the first half and Blaize Sims and Aaliyah Grubbs were there to help. The speed of Souders was tough, but Sipe continued coaching her team from the goal to keep the pressure up and made multiple saves in the first half of play. Southwestern’s Kelsey Miller continued firing on the goal and got another shot (27′)  that went just wide of the net.

With nine minutes left on the clock in the first half, the Lady Warriors’ Souders had a beautiful cross pass to Miller, whose shot went over the top of the goal. With one minute left on the board Maddie Angel took the free kick from a handball call, but it was quickly cleared by junior Haylee Flynn. Senior Annie Pendygraft took a shot from the cleared ball, but the goalkeeper stopped the long shot. The halftime buzzer sounded and Southwestern had multiple shots on the goal and Mercer had only a few. The game was tied, 0-0.