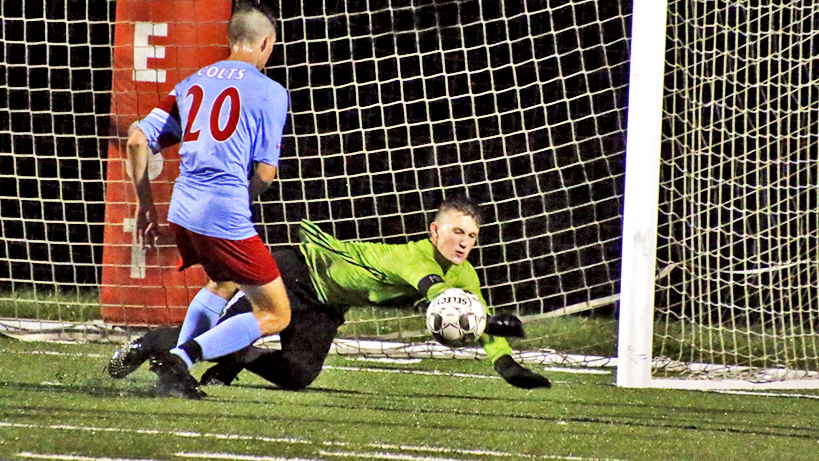 The Harrodsburg Herald/Wesley Bird
Jase Cocanougher deflected the ball from the goal in the Titans’ district championship loss to West Jessamine Thursday, Oct. 7.

The game was supposed to be played at Mercer on Wednesday, but was moved to East Jessamine due to weather and postponed entirely after an hour of lightning delays. The game was rescheduled to Thursday and at West Jessamine because they have a turf field.

Lightning still flashed across the sky at times during the game, but KHSAA rules state the game can continue as long as it is 10 miles away. Mercer and West Jessamine athletic trainers took turns monitoring the weather radar, and luckily the game was able to be played without stoppage unlike some other district games in the area.

West Jessamine started the game with the first shot on goal that was caught by Mercer’s goalkeeper Jase Cocanougher (4′). The Titans had a good look on the goal with a James Johnston free kick that got in the box, but the Colts defense cleared the ball (6′).

The Titans stayed aggressive and had another scoring opportunity with Johnston taking another good looking free kick and Forte Bess tracked it well in the air for the header, but Colts goalkeeper Connor Archer punched the ball away at the last second (8′).