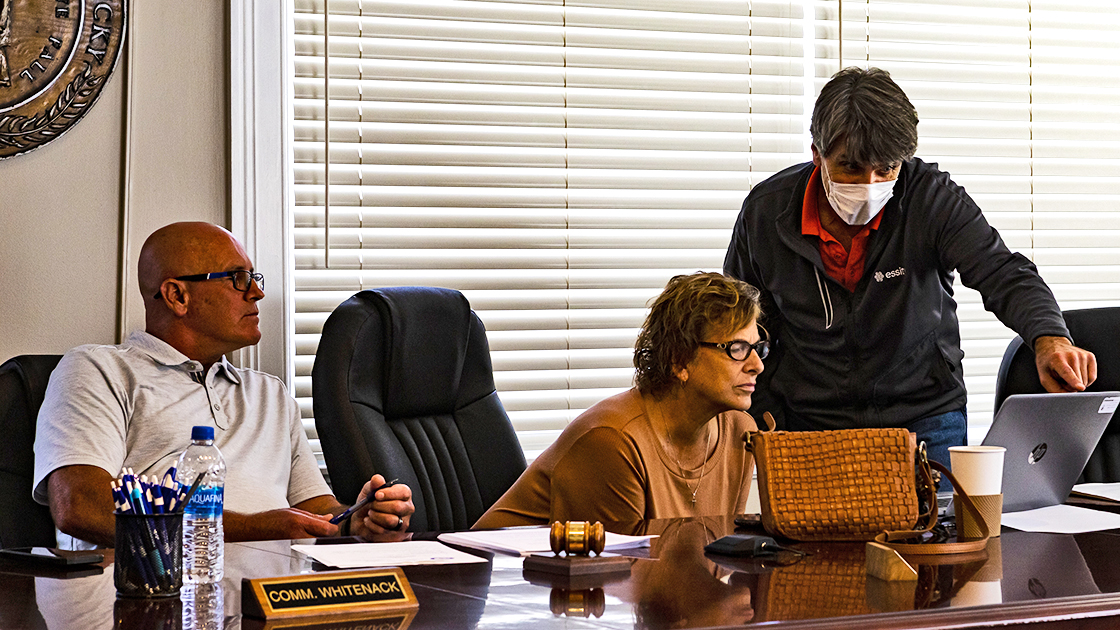 The Harrodsburg Herald/Robert Moore
Mayor Billy Whitenack and Commissioner Jennifer Kazimer watch video provided by Pete Peterson of the two most accidents at the Essity parking lot. The city commission voted to install a guardrail.

The Harrodsburg City Commission is working with Essity to install a guard rail for the west end of the US 127 bypass. The road-which was built by the state and deeded over to the city-has a hard right angle curve. There have been three accidents in the area because of a sharp turn over the last few years, including one this September.

Last month, the commission asked the Harrodsburg Police Department to step up patrols in the area and voted to install signs in the area warning motorists about the curve. The signage has been ordered but has not been installed.

Pete Peterson of Essity appeared before the commission to discuss the issue again. Peterson also showed the commissioners video of the last two accidents. He said the company is worried about employees being hurt. Essity is willing to contribute $2,500 towards installing the guardrail.

“They’d like to have some guardrails up to protect their people,” said Commissioner Marvin “Bubby” Isham. Isham said he’d received one estimate-for $5,000-so far. He moved for the city to pay everything else beyond Essity’s contribution. The motion passed unanimously.

Mayor Billy Whitenack said it will monitor idling, seat belt usage, speeding, braking and sharp turns. In addition, Whitenack said city officials would be notified if vehicles were going out of city limits. He said the HPD would know where every vehicle is.

The mayor said the cost is $17 per vehicle per month. “If they’re doing something wrong, it’s going to send you an email alert,” Whitenack said.

Commissioner Isham said some vehicles probably wouldn’t need to be monitored, such as dump trucks at cemetery.

“I think if we put it on one we should put it on all city vehicles,” Whitenack said. He said said the city didn’t want to act like Big Brother, but it could save the city money on insurance and would help them handle complaints about speeding, excessive idling and reckless driving.

“I’m 100 percent for it,” said HPD Chief Brien Allen, who noted more police officers are killed in accidents by not wearing seat belts. Allen asked if the GPS would note when they have their emergency equipment on, such as lights and sirens.

“I’m fine with doing it,” said Commissioner Isham, who asked if they could take tracking off some vehicles later on. “It might open our eyes to something that’s going on.”

Isham moved to install the devices. The motion passed unanimously. The costs will come out of each department’s budget.