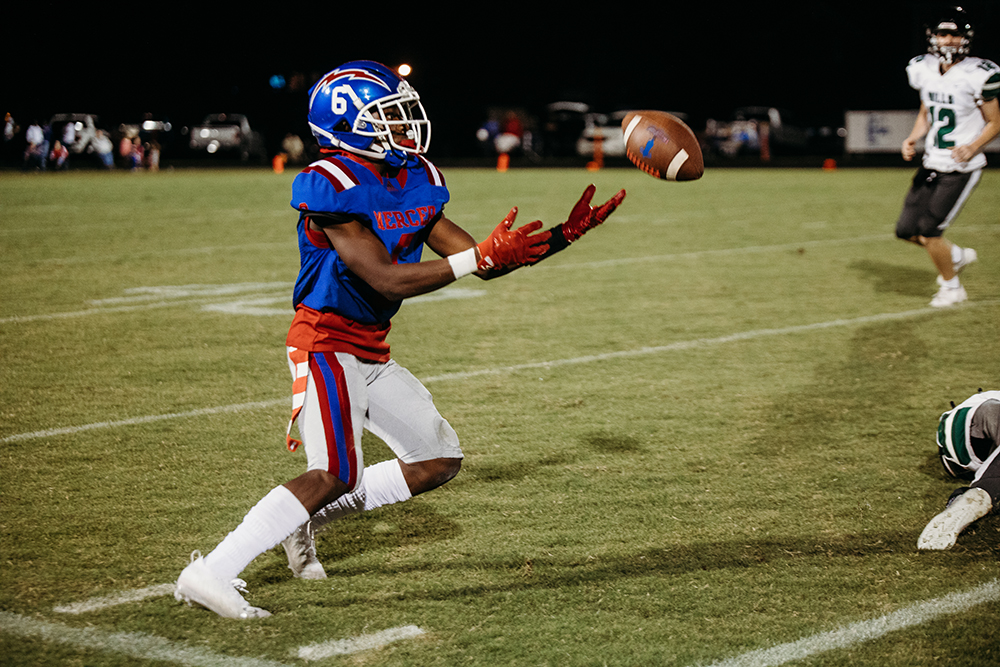 Sarah Hill Photography
Sophomore Thaddeus Mays had his best game as a Titan against the Western Hill Wolverines Friday night, with four receptions for 146 yards and two touchdowns.

The Mercer County Titans Football team (5-2) won their homecoming game with a 28-21 victory over the Western Hills Wolverines (1-5), Friday, October 1. The Horn Home Supply  game featured an exciting aerial offensive attack from the Titans with senior quarterback Trosper Buchanan throwing for a career high 256 yards and a relentless Titan defense that forced five turnovers. Sophomore Thaddues Mays also had his best game as a Titan with four catches for 146 yards and two touchdowns. The Titans were also without two very impactful seniors, Brayden Dunn and Jalen Lukitsch.

Mercer received the opening kick off and started their first drive on their own 36 yard line. After two rushes from both Riley and Jackson Peavler the Titans faced third and 10. Buchanan rolled out of the pocket and found Riley Peavler wide open down the left sideline for a 64 yard touchdown, 7-0. Jonah Lewis added on the extra point. He was four for four on the night, bringing his season total to 18 out of 19.

After a Beau Brown touchback on the kick off the Wolverines started on their own 20 yard line. Western Hills found success on the drive with their quarterback Dylan Engler scrambling a few times for first downs. They finished the drive with a seven yard rushing touchdown and added on the extra point, 7-7.

After Garrett Fister handled the onside kick the Titans took over on their 46 yard line. On the Titans second play of the possession, Jackson Peavler took the toss behind good blocks from his O-line and after breaking a tackle, he couldn’t be caught on his way to a 50 yard touchdown run, 14-7.