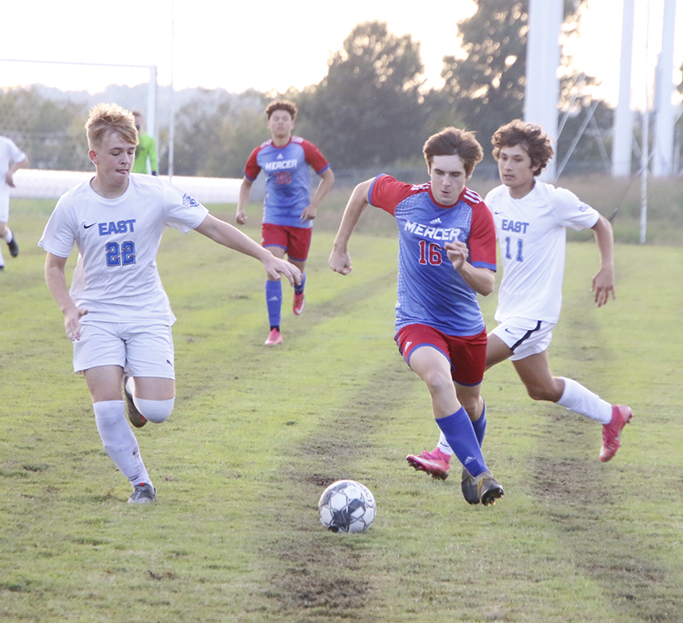 The Harrodsburg Herald/Wesley Bird
Senior Jonah Lewis fought for the ball against the defender in the Titans’ win over East Jessamine Monday night.

The Mercer County Titans boys soccer team (9-8-2) defeated the East Jessamine Jaguars (9-9-1) in an exciting 2-1 victory to make it to the 46th district championship game. Not only did they get the win, but they celebrated four seniors beforehand: James Johnston, Jonah Lewis, Chase Mobley and Hunter Booth.

The field conditions on Monday night were less than ideal with the majority of the field being soggy from the weekend rain. Some areas were so bad sand had to be added before the game started.

That didn’t stop the Titans as they came out of the gate with great energy and got shots off early, including a nice feed from Kyler Sallee to Chase Mobley in the box for a shot that just went wide left of the goal (3′).

They continued the attack with Jonah Lewis beating his defender for the ball and passing it inside to Gavin Wilson, who got a shot on goal, but Jaguar keeper Tannar Nally made the save (5′).

On the other side of the field Beau Brown and James Johnston continued to punish any offensive player that passed mid field whether it was a stop in the box or a big takeaway.