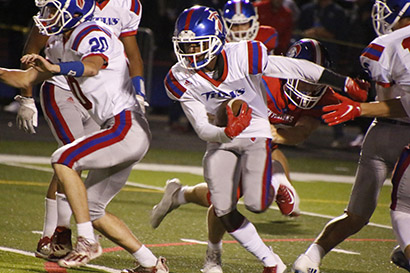 The Mercer County Titans football team (4-2) lost 42-0 to the Christian Academy of Louisville (CAL) Centurions (5-1) on an off night for the whole team, Friday, Sept. 24.

Mercer started the game with the ball and after two rushes for minimum gains, they went to the air on third and long, but CAL’s Easton Messer stepped in front of the pass intended for Jalen Lukitsch and took the interception back for a 23 yard touchdown, 0-7.

On the Titans next drive Tropser Buchanan found fellow senior Aaron Caton for a completion, but CAL’s defense made a quick stop and forced a punt. Lukitsch’s 53 yard punt pinned the Centurion’s on their own 13 yard line.

Mercer’s defense held CAL’s offense to six plays until forcing a punt themselves which went out of bounds, giving the Titans the ball on the Centurions’ 49 yard line.  Mercer’s ground game couldn’t get anything going with two runs from Brayden Dunn gaining two yards. Buchanan’s third down pass was incomplete, bringing up fourth down. The Titans brought out the punt team and Lukitsch had room to punt the ball, but decided to try to gain the eight yards needed for the first. He slipped on the turf, losing five yards and giving CAL the ball on the Titans’ 47 yard line.

The Centurions found the end zone eight plays later on a three yard rush up the middle to extend their lead, 0-14.

After a penalty on the kickoff return, the Titans started their next drive from their own 10 yard line. Dunn had his best run of the night with a nine yard pickup and then got the first down on the next play. The Titans drive stalled after two incompletions, bringing out the punt team again. Lukitsch was able to flip the field with a 40 yard punt.

Mercer’s defense was able to contain the Centurions run game on the drive, but gave up chunk plays in the air with completions of 17 and 15 yards. CAL would punch in another touchdown with a five yard rush, 0-21.

The Titans offensive woes continued with Dunn getting tackled in the back field and Buchanan not handling the snap which brought up a third and 20 situation. Buchanan was hit on the following pass attempt causing an incompletion and forcing another punt.

CAL took over at midfield and marched down to the six yard line where the Titans were able to stop them three times and force a fourth and one. After the teams exchanged timeouts, the Centurions would convert and score on a quarterback dive, 0-28.