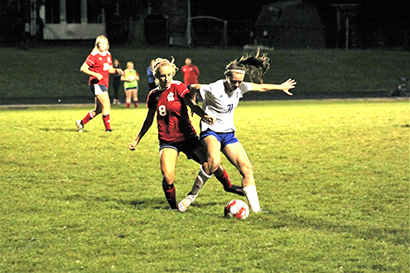 The Mercer County Lady Titans were on the road Saturday night, Sept. 25 ending with a tie, 2-2, against the Anderson County Lady Bearcats.

Emma Kiernan came out strong in the first half with a couple great shots on goal within the first 10 minutes of the game.  Kiernan was able to sneak one over the goalkeepers head, 1-0.

Anderson Junior Olivia Grivvin was able to blow past the Mercer defense for her first goal of the game, tying the game, 1-1.

Ryleigh Sipe was getting her workout in the goal, as well as, the Titan defenders.  Unfortunately, the referees allowed the game to get a little too physical and there were multiple injuries during the night.  Presley Boyne went out of the game within the first 15 minutes, with a hurt wrist after an Anderson County trip. Ten minutes later, McKinley Stagner went out with a leg injury after being tripped.

With about 19 minutes left in the game and two players down for the Titans,  Anderson’s Brianna Ramsey took a clear, strong shot that sailed over Sipe’s head to put the Lady Bearcats up 2-1.  The Bearcats kept the ball on their end and Sipe stayed busy in the goal.

Several fouls were called toward the end of the first half and another delay of game occurred when an Anderson player went down with an injury.

In the second half, Mercer struggled to keep a rhythm on the field.  The fouls and physical play continued and the crowd was getting unruly.

Coach Josh Culver tried to keep his players calm and their focus on the field.

For the rest of this story and the game against Danville, check out this week’s issue of the Harrodsburg Herald. Click here to subscribe.