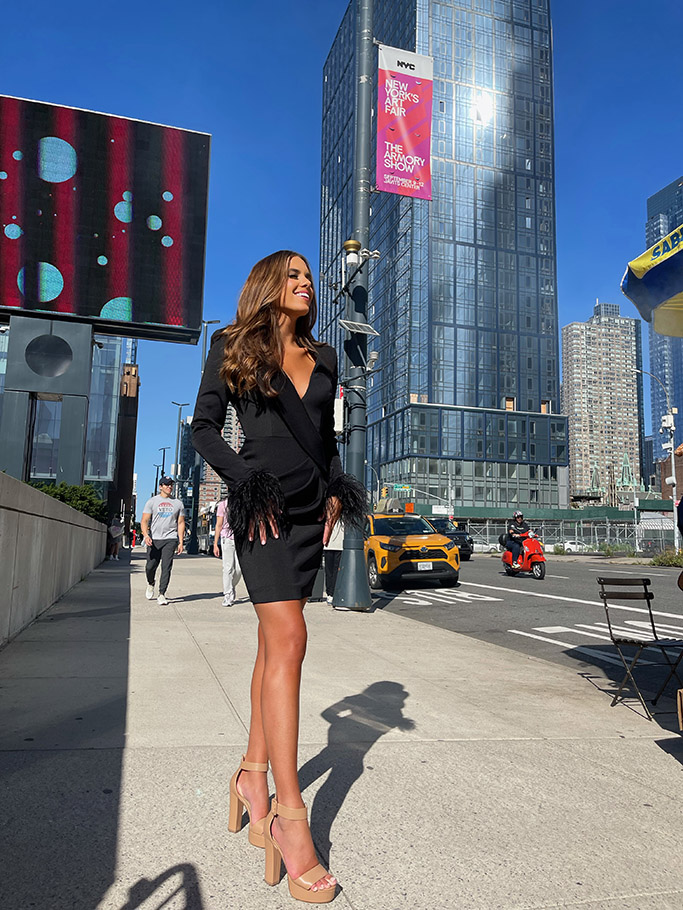 Emma Buchanan recently returned from New York, which she called a “trip of a lifetime,” after being chosen as one of seven finalists—from 3,600 applicants—for the Jovani It Girl.

While at the University of Kentucky, Buchanan worked at Geno’s Formal Wear. There she was introduced to the Jovani fashion line-the fashion house has over 2,000 stores worldwide and specializes in weddings, pageants and apparel for formal events.

“I fell in love with the line and it became my go to when helping customers find a dress. It fit several body types and it always looked great,” she said.

So in 2019, Buchanan began to pursue the title of Jovani It Girl. After moving onto the second round, where she had to complete a Facetime interview and runway walk, she was selected as one of the 16 finalists to model for Jovani at AmericasMart in Atlanta, the wholesale trade show where buyers from across the country buy for the next fashion season.

“Of all the things that were canceled because of COVID, that was what I was most disappointed about,” said Buchanan.

As a student finishing her business degree online due to the pandemic, she then switched her focus from fashion to food. She began a gourmet peanut butter business, Queen Bee. Over the next year she grew her business from selling from home over social media to a commercial kitchen and retailing in stores across the state.

Then this past June, she received a call that the finalists who missed their trip to Atlanta were being asked to join this year’s 10 finalists in the Jovani trade show in July.

For a week, she modeled the Jovani line for potential buyers. At Geno’s, she had been on the other side of the counter.

“Our boss would call in to let us know what styles were at Mart. We would always be excited to hear about what was coming out. It was surreal to be on the other side of that. To be the one modeling the dresses,” she said.

Before leaving Atlanta, Buchanan learned two of the 26 had been chosen to model for Jovani during the Coterie Marketplace in New York. A few weeks later, she learned she was also selected as one of the top seven flying to New York to model for buyers and socialites and be part of the 2022 Jovani fashion line marketing campaign.

“Each night they had dinner and events planned for us and as I was sitting on Broadway waiting for ‘Wicked’ to start, I became teary-eyed. I was appreciative of the opportunity to get to be someplace I had only dreamed of being and doing something I never thought I would get to do,” she said.