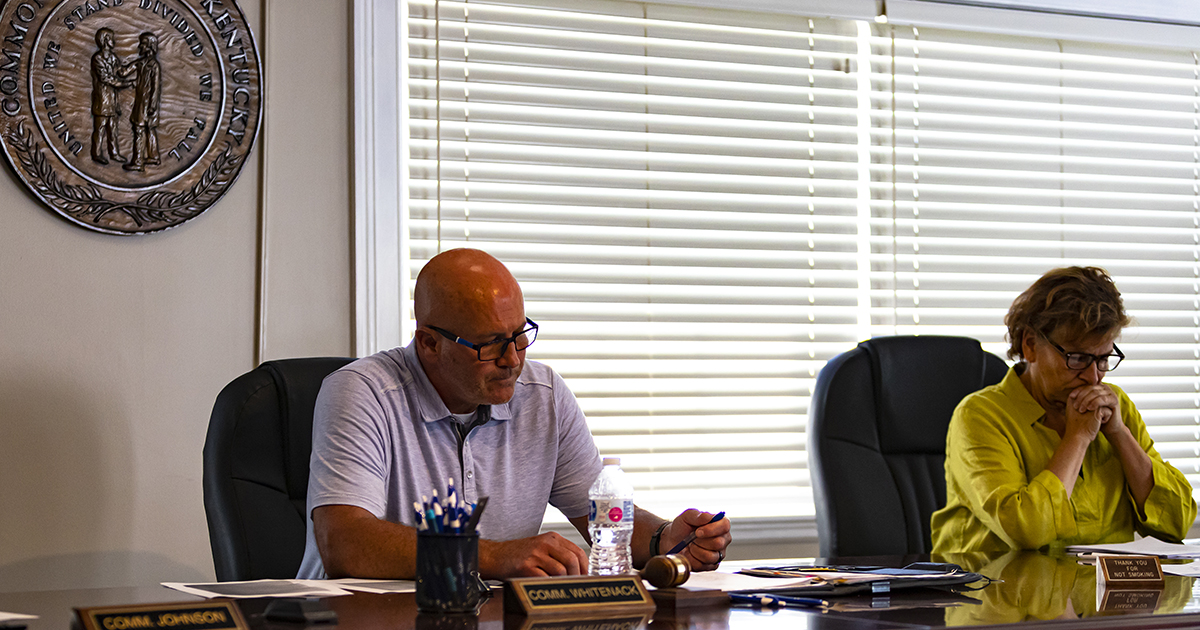 The Harrodsburg Herald/Robert Moore
The Harrodsburg City Commission chose to set the tax rate at .697 per $100, which will produce a total of $345,352.79 in revenues. Pictured: Mayor Billy Whitenack and Commissioner Jennifer Kazimer.

The commission held a public hearing on at 11:00 a.m., where only one person—former commissioner Charlie Mattingly—spoke.

“I’m not here to speak for myself,” said Mattingly, who said it was a bad time to raise taxes. “There are a lot of people hurting in the city.”

City officials say the new tax rate would raise the tax bill on a $100,000 house by about $3.21. Mattingly said that was a lot of money for some people, especially those on fixed incomes.

“That little bit of money would mean a lot to people,” said Mattingly, who asked them to take the substitute rate of .671 per $100 instead.

Mattingly said there had to be somewhere in the budget that could be cut instead of raising the tax rate.

“If I was here, I would have to vote against it,” Mattingly noted. “I don’t think you need the money that bad.”

Mattingly said it had been a rough couple of years, especially with the COVID-19 pandemic.

Mayor Billy Whitenack said the city had to use approximately $1 million in reserves to make up for a budget shortfall. Whitenack said the former city council approved the four percent increase–calculated by the state to increase collected tax revenues, not individual tax bills–last year.

“I hate raising taxes, I hate ’em,” Whitenack said. However, he said he would pay $600 more if he lived in Danville or Lawrenceburg than he does by living in Harrodsburg. “I hate to see any tax raise but I don’t see where we have any other choice.”

At the public hearing, Mattingly also asked about moving the meetings back to 6 p.m. Last month, the commission voted to move the meetings to noon.

Whitenack said the main reason to change the time was that they were paying city employees overtime to attend meetings. He said the fiscal court and other entities have held their meetings early in the day and no one objects. The mayor said the new time could make the meetings more accessible to people who work late hours.

“People who work second or third shift have never been able to attend meetings,” Whitenack said. “It’s good for our employees, it’s good for the citizens.”