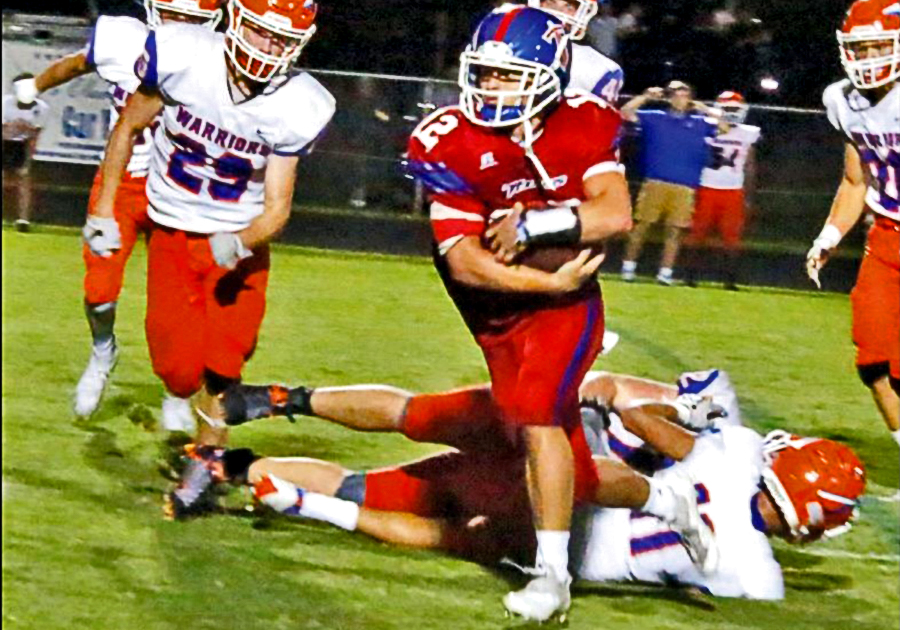 The Harrodsburg Herald/Wesley Bird
Senior Jackson Peavler scored the game-winning touchdown on fourth and 23, handing the Titans a 22-21 win over Southwestern Friday night.

Southwestern received the ball to start the game and were moving down the field with their run heavy offense until Mercer’s bend-but-don’t-break defense was able to force a turnover on downs at the Titans’ 20 yard line.

Mercer’s first play was a 37 yard bomb from senior quarterback Trosper Buchanan down the right side to Jalen Lukitsch. A penalty would stall out Mercer’s drive down the field at Southwestern’s 36 yard line. Head Coach David Buchanan elected to punt and it turned out to be a great call as Lukitsch made an incredible diving save to keep the ball out of the endzone, resulting in the Warriors starting on their own two yard line.

The Titan defense did their job forcing a three and out and made Southwestern punt out of their own endzone. The Titans offense took over to begin the second quarter with a good run from Brayden Dunn and a completion to Lukitsch. Jackson Peavler put Mercer on the scoreboard first with an impressive 23 yard touchdown run after shaking off two defenders in the backfield. On the extra point attempt the snap was off target, but senior Aaron Caton was able to get the ball down for Jonah Lewis to put it through the uprights, 7-0. Lewis went two for two on the night, he is 14 for 15 on the year.

Beau Brown had a touchback on the following kickoff to make the Warriors start from their own 20 yard line. Southwestern’s running back, Giddeon Brainard broke loose for a 74 yard touchdown, but it was called back due to an unnecessary roughness penalty. The Warriors were unfazed as their next play went for 83 yards. Thaddues Mays saved the touchdown with a tackle on the six yard line. Southwestern would go in to score three plays later with a two yard toss and kick an extra point, 7-7.

Mercer began their march down the field with big plays from Buchanan, Mays and Dunn. The Titans looked to score going into halftime with a minute on the clock and 10 yards to go for another touchdown. Southwestern was able to make a stand and stop four straight runs and keep the score tied at halftime, 7-7.