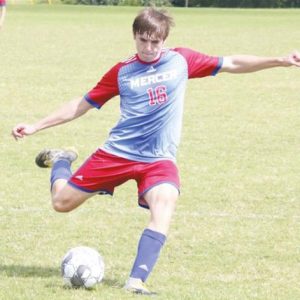 The Harrodsburg Herald/Wesley Bird
Senior Chase Mobley scored a goal and had an assist for the Titans, who beat Bethlehem on Saturday, Sept. 18.

The Mercer county Titans boys soccer team (7-6-2) beat the Bethlehem Eagles (8-2-3) in a 2-0 victory Saturday, Sept. 18, at home. Bethlehem is a private Catholic school in Bardstown that is over 200 years old.

The Mercer team was faced with some adversity before the game started with only having 13 available players, they were without one starter and two subs.

The Titans were aggressive early with a Hunter Booth corner kick to Gavin Wilson, but his header went wide right (5’). On the other end of the field Jase Coconaugher stopped the Eagles attack with a nice save (8’).

Mercer kept the Bethlehem back line working with shots by Troy Rivera-Diaz (10’) and Wilson (12’) that were just off the mark. 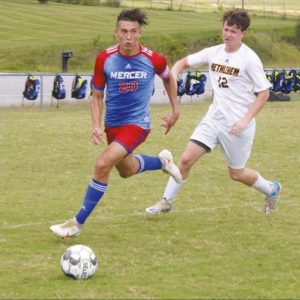 The Harrodsburg Herald/Wesley Bird
Junior Beau Brown made a run from his back line position in the Titans’ 2-0 victory over Bethlehem Saturday afternoon.

Mercer’s defense was tested again when the Eagles were rewarded a free kick just outside of the penalty area, but the shot was blocked by Forte Bess (17’).  Bess was busy on the other end with a long serve up ahead to Collin Warren who got off a shot on goal that was caught by Bethlehem’s keeper, Jude Gribbons (21’).

Bess made his own run into Bethlehem territory and got fouled hard. Wilson took the free kick and put it over the goal (29’)

The Eagles found themselves in scoring position in the box, but Coconaugher made his best save of the day with a diving effort to stop the goal and James Johnston cleared it up field (34’).

Just before the halftime whistle, Booth sent a ball from center field to Chase Mobley down the right side. He beat his defender to cross the ball in front of the net and Bess took it from there with a beautiful header in the top right corner of the goal (38’), 1-0.