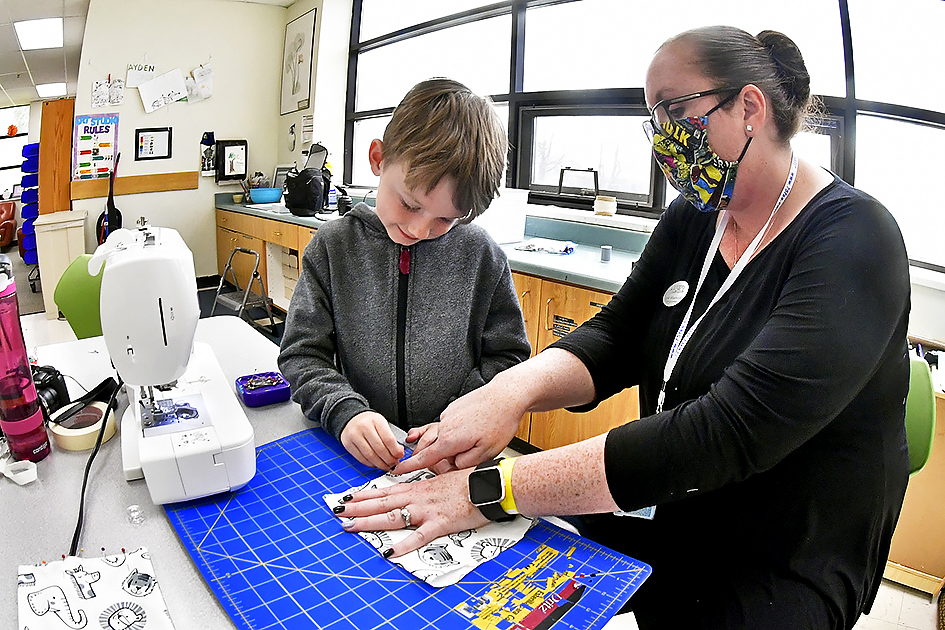 A boy pins mask material to a pattern is helped by Sarah Wheelwright, school age coordinator, at the Youth Center April 8, 2020, at Hill Air Force Base, Utah. Children at the center have taken on the task of creating masks for themselves and for care givers at Hill AFB’s Youth and Child Development Centers. (U.S. Air Force photo by Todd Cromar, via Wikimedia Commons).

Both local school systems have voted to end the universal masking mandate.

Masking had been mandated—first by Gov. Andy Beshear and then the Kentucky Board of Education—but the General Assembly passed Senate Bill I in a special session, giving local school districts control of the decision making process.

The Burgin Board Of Education voted 4-1 to end universal masking.

According to a letter from Burgin School Superintendent Will Begley, masking will take place on all buses and everywhere in the building except when students are sitting at their personal workstations or when they are sitting down to eat.

One day later, the Mercer County Board of Education voted 3-2 to end universal masking.

If for three consecutive days the school’s positivity rate—calculated from the first 26 days of the school year—from 5.5 to 11, masks will be required for at least a week until the cases go back down, according to a letter from Mercer Superintendent Jason Booher.

Students will need to be prepared to wear a mask in certain situations, like small group learning and will need to keep a mask at their desks.

The policies for Burgin and Mercer went into effect on Friday, Sept. 17.

The Mercer school board chose the most popular of three options according to a survey, Booher said. However, at the public participation section of the board meeting, most spoke in favor of keeping masks on.

Noting the surge of infections and deaths—COVID-19 has now killed about as many Americans as the 1918-19 Spanish flu pandemic did in the same amount of time—Sullivan wondered why board members would choose to go against the consensus medical guidance on preventing spread of the coronavirus.

“Why should we unmask now?” Sullivan asked.

Mask wearing and vaccinations—methods of preventing the spread of communicable disease which this nation formulated in the early 20th century and has led to the eradication of diseases such as small pox and polio—have become politically controversial in the past year. One speaker called mask mandates “tyrannical” at the board meeting. Sullivan said he was not impressed with the arguments against the measures.

“Any responsible parent wouldn’t use that argument for seat belts,” said Sullivan, who said he knew two students who have lost parents to COVID-19 this month.

Sullivan noted that infections among children has surged in recent months.

“This is the wrong time to back away from protecting our children,” Sullivan said. “Masks save lives.”

While Cathy Akins, the executive-director of the Mercer County Health Department, spoke at the meeting and Sandy DeFoor, the chairwoman of the Mercer County Board of Health, wrote a letter asking the school board to keep the mask mandate, most members of the board were against the idea.

“This is not going to be an easy decision, no matter what,” Phillips said. “We don’t know what’s going to happen.”

Phillips asked Booher for a recommendation. In a prepared statement, Booher said 2,200 people participated in the survey and the option to keep the mask mandate in place was the least popular.

“Schools are the only place our students and teachers are mandated to mask,” Booher said. He said school officials need to find a way to get back to normal, although he noted that mask wearing in certain circumstances was going to become a part of that new normal.

Booher recommended the most popular option, saying they could move back to wearing masks if they see a spike in infections.

“I think we need that flexibility,” Booher said. “We are still highly recommending to wear masks.”
Phillips and board members Amber Franceschi and Cliff Prewitt voted yes while Larry Yeager and Billy Montgomery voted no.

The board also approved paying incentives to staff to get vaccinated.

The district approved paying $200—$100 from the state and another $100 in matching funds from the district—to every employee who gets vaccinated before Dec. 1, 2021.

The policy will cost the district approximately $58,000, according to the finance officer. The payments could be made with federal ESSER funds.