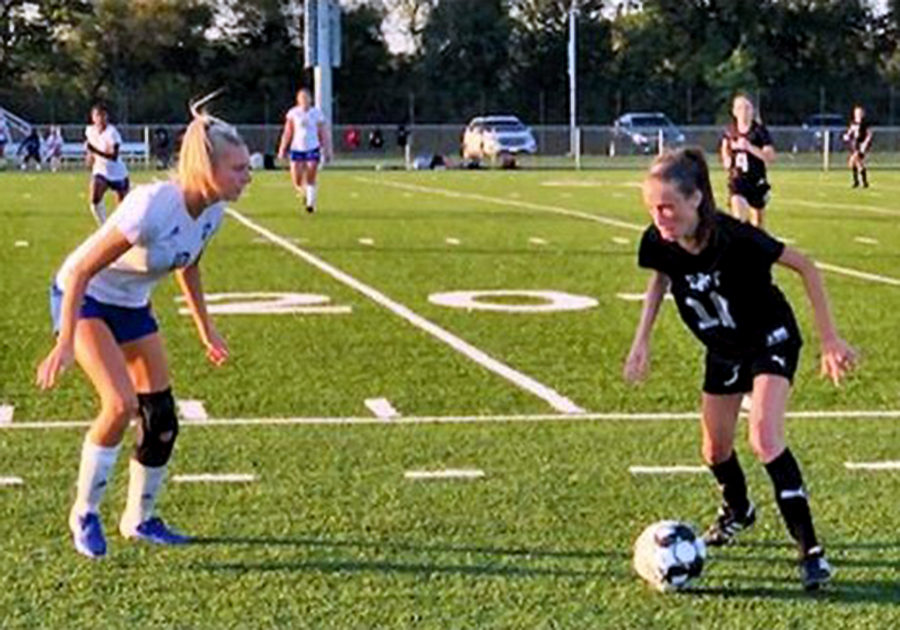 The Harrodsburg Herald/Stacy Davis
Cleared for play after an ACL injury, Senior Annie Pendygraft went on the attack during the Lady Titans’ win against East Jessamine Thursday.

The Mercer County Lady Titans beat the East Jessamine Lady Jaguars for the second time this season Thursday, Sept. 16. The first game ended in a 4-1 victory for the Lady Titans and they won their second game, 4-0, this time on the road against the Lady Jaguars.

The game started off sluggish and Coach Josh Culver was not happy with the sloppy play by the Lady Titans. Senior Maddie Angel picked up the pace and made her presence known during the first few minutes of the game with a long shot; however, the Lady Jaguar goalkeeper prevented a goal.

The Lady Titans were getting some strong shots on the goal in the first 10 minutes of play but weren’t shooting hard enough to get any of them to land. The Lady Titans were struggling to communicate during the first half, which has plagued them this season. There were good crosses made in front of the Mercer goal by Senior Marlie Charles and Freshman Laykin Irvin; however, no one was there to follow it up for a much-needed goal.

East was able to get the ball down through the mid field and past the defenders for a few shots on goal, but Junior Ryleigh Sipe was ready. Sipe made the stops in the first half and kept the Jaguars scoreless.

Angel stopped East in their tracks and sent the ball up the field but were unable to score in the first half, 0-0.

At half time, Coach Culver, not happy with his team’s play, told his girls he needed to see hustle, intensity and goals on the scoreboard and that’s exactly what he got. They came out the second half and looked like a different team with six shots on goal in the first six minutes.