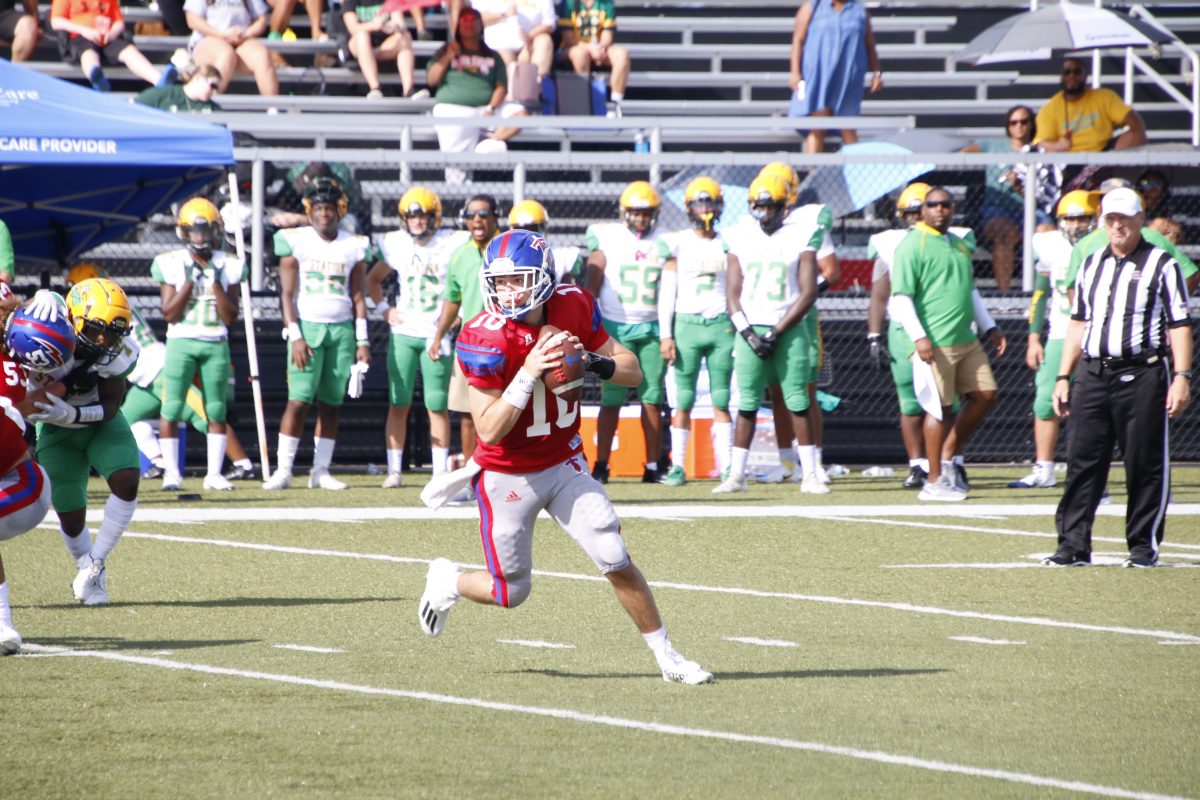 The Harrodsburg Herald/Wesley Bird
Senior quarterback Trosper Buchanan rolls out to complete a pass to Austin Beasley during the Titans’ loss to the Bryan Station Defenders during Saturday’s Rebel Bowl game.

The Mercer County Titans (1-1) fell to the Bryan Station Defenders (1-1) Saturday, Aug. 28 with a final score of 0-28. The Titans knew the game would be a challenge considering the Defenders finished top three in the 6A class last season.

Being the first game in the Whitaker Bank sponsored Rebel Bowl also played a factor in the game for both teams, who not only battled each other, but the high temperatures as well.

The game started with a great play from senior Jalen Lukitsch who took the opening kickoff 64 yards to start Mercer with a great field position.

The Titans couldn’t finish the opening drive and turned the ball over on downs to the Defenders, who couldn’t convert their own fourth down due to a diving pass break up by Brayden Dunn.

On the Titans next offensive drive, senior quarterback Tropser Buchanan connected with senior Riley Peavler for a 25 yard completion, but was ruled out of bounds. The Titans were forced to punt which Lukitsch’s leg and a penalty pinned the Defenders on their own 12 yard line.

Mercer quickly forced another Bryan Station turnover on downs with a big stuff at the line from senior linebackers Wyatt Stanford and Dunn.

The Titans offense were unable to get into rhythm with the speed and pressure of the Bryan Station’s defense. Buchanan was under pressure all evening including being sacked twice.

The Titans went on to turn the ball over on downs just outside of the red zone.

Mercer’s defense forced a quick three and out with a Thaddeus Mays pass break, but the Defenders found the endzone on their next drive with 45 seconds left in the half making the halftime score 0-7.

The Defenders received the ball coming out of halftime. They scored on the drive after Mercer’s Austin Beasley forced a fumble in the endzone, but a Bryan Station lineman recovered the ball to put them up 0-14 after the extra point.

The Titans couldn’t establish their run game they had so much success with in the previous week. The Titans were forced to punt to the Defenders who scored on the following possession with a 10 yard screen pass for a touchdown to go up 0-21.

Mercer’s best play of the evening came on their next drive when Buchanan rolled out of the pocket and threw a perfect pass to an in stride Aaron Caton down the sideline. Caton was tackled on the nine yard line after a 72 yard gain.