Behind The Scenes With OVW At Pioneer Days 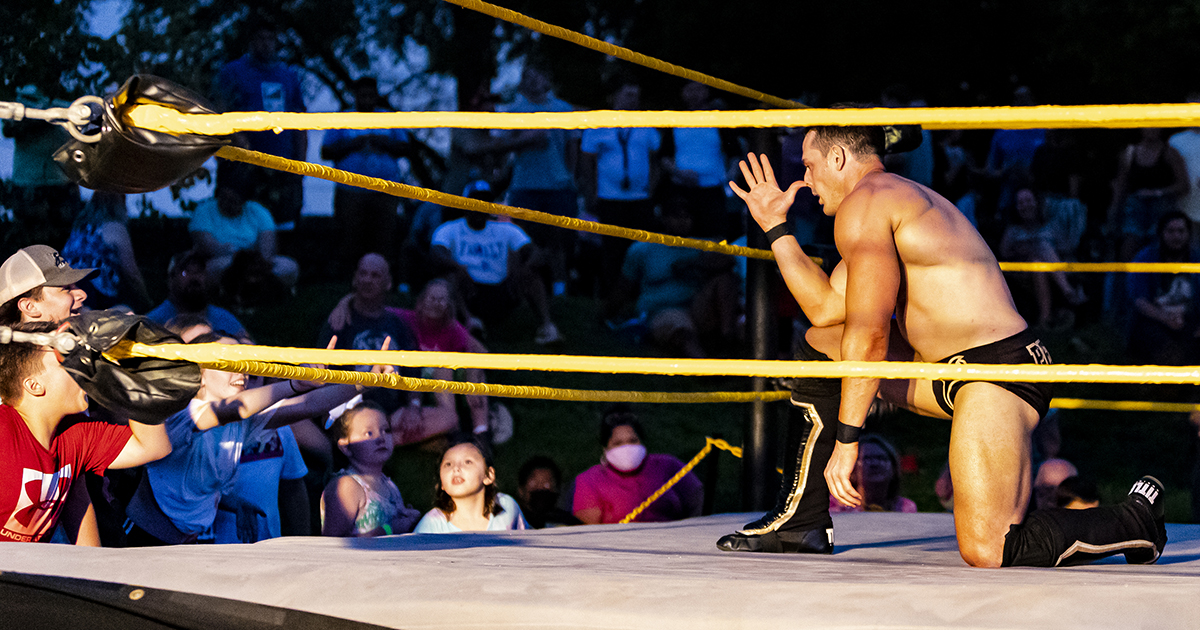 The Harrodsburg Herald/Robert Moore
Mr. Pectacular (Jessie Godderz) shares a warm moment with the fans during the OVW exhibition at Pioneer Days.

Mr. Pectacular, the reigning Ohio Valley Wrestling National Heavyweight Champion, clobbers his opponent, Luscious Lawrence, with his championship belt. It’s a shocking act of brutality. Mr. Pectacular didn’t even wait for his theme music or anything.

For the rest of the match—two falls out of three—Mr. Pectacular will choke the dazed Luscious Lawrence with the ropes, slam him repeatedly to the mat and leap across the ring to deliver blows that would seemingly kill a lesser man.

Mr. Pectacular appears to be having a wonderful time, gleefully thumbing his nose at the crowd gathered at Old Fort Harrod State Park.

But that will come later on Saturday. 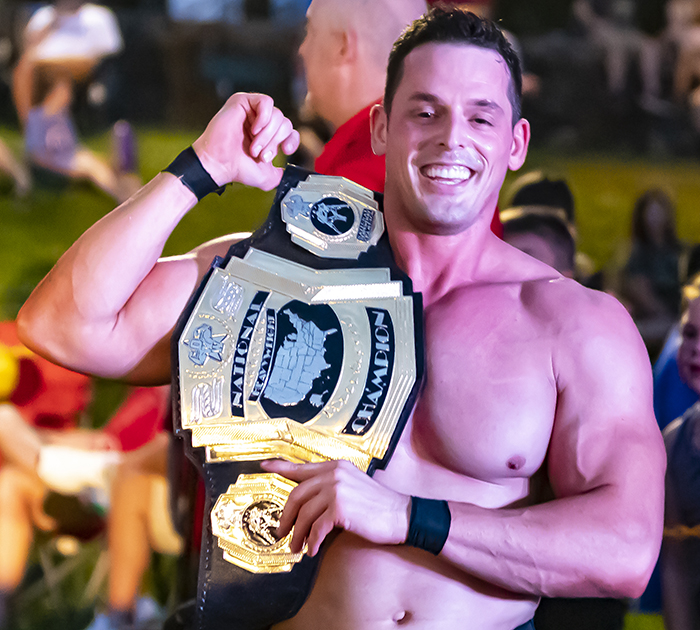 Earlier that day, Mr. Pectacular is more worried that nobody harm a bee.

Mr. Pectacular’s real name is Jessie Godderz. He and his fellow wrestlers are using the cabins in the fort for dressing rooms.

“This is a first,” said Godderz about wrestling at the fort. He and another wrestler, who goes by Hyzaya are being harrassed by a bee. Godderz and Hyzaya—who is a bad guy, or, as they way in wrestling, a heel—agree the bee should not be harmed.

“He’s bugging out,” said Godderz, who speculated the bee was guarding his territory and meant the wrestlers no harm.

Jessie Godderz has been wrestling since 2009 under the name of Mr. Pectacular and a few other aliases. He said he wrestles up to four times a week. And while he had never wrestled at a historic simulation of a frontier settlement before, he said he was looking forward to it.

Originally from Mason City, Iowa, Godderz has wrestled with several promotions around the country, including an earlier stint with OVW. He said he was drawn to wrestling by the larger than life characters such as Hulk Hogan and the Ultimate Warrior.

“It’s completely different,” Godderz said of the promotion, which was founded in 1993 by “Nightmare” Danny Davis, the former manager for Jerry “The King” Lawler. OVW has served as a training ground for wrestling superstars like John Cena, Randy Orton, Brock Lesnar, CM Punk, Mickie James, Cody Rhodes and Shawn Spears. According to their website, OVW became the world’s only state-accredited professional wrestling trade school in 2019.

“We’re continuing to grow OVW,” Godderz said. He said wrestlers travel all the way from Michigan and Wisconsin to participate.

“They see the upside,” he said. “It’s definitely one of the top promotions.”

He said the audience is even growing in India, thanks to wrestler Mahabali Shera,who bills himself as “the Indian Lion.”

“You can see it grow across the country and around the world,” Godderz said.

It helps that OVW is on television, including on CW Lexington, WKYT, on Thursdays at 10 p.m. and Sundays at 5 p.m.

For the rest of the story and for more pectacular pics of the OVW action at Pioneer Days, check out this week’s issue of the Harrodsburg Herald.