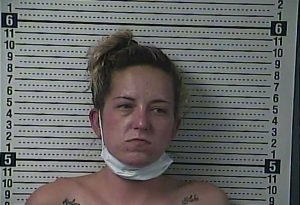 Megan Rae Marlow, 31, of Harrodsburg, was arrested on Thursday, Aug. 19. Marlow was charged with 2nd-degree manslaughter, tampering with physical evidence, aggravated trafficking in heroin, trafficking in marijuana and possession of drug paraphernalia.

While searching Marlow’s home on Azalea Street, investigators found evidence of what they called a “large narcotics sales operation.”

They found transaction ledgers, drug paraphernalia, cutting agents and a large amount of cash in excess of $40,000 hidden in multiple locations throughout the upstairs in house, according to a uniform citation filed by Dep. Sean Brown of the Mercer County Sheriff’s Office.

In addition, investigators found up to eight grams of marijuana in a small children’s bedroom, according to the uniform citation.

Information in one transaction ledger matched a text conversation between Marlow and the deceased concerning a suspected narcotics purchase that occurred on Tuesday, Aug. 17, according to the uniform citation.

Marlow was arraigned on Monday, Aug. 23. She entered a not guilty plea to charges against her.

Marlow is scheduled to return to court on Thursday, Aug. 26. She is being held at Boyle County Detention Center on a $200,000 bond.

Brown is the arresting officer, with assistance from Deputies Matt Swabey and Paul Parks.