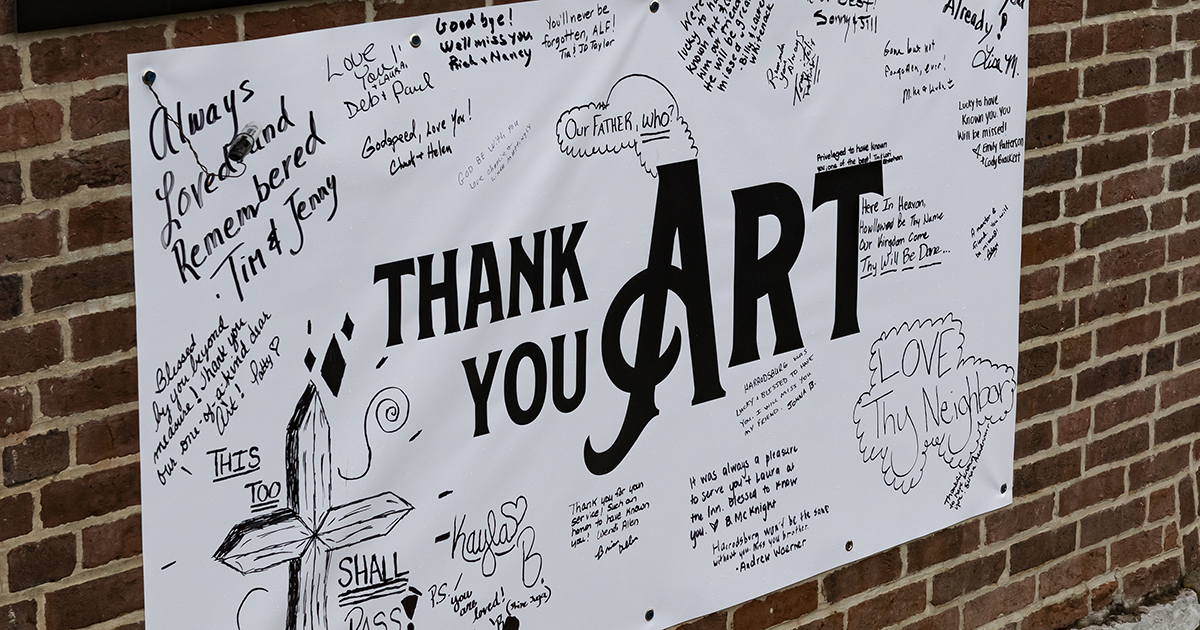 The Harrodsburg Herald/Robert Moore
A sign for people to express their condolences for former Mayor Art Freeman has been placed on the wall of the Vault—Ciders, Suds and Spirits on Main Street. Another sign will be installed in the garden across from Freeman’s home on Beaumont Avenue.

According to his obituary, Freeman died Friday, Aug. 6, at the Ephraim McDowell Regional Medical Center in Danville. He was 70.

Freeman resigned as the mayor in June. His two and a half years in office were momentous ones for the city, beginning with his election in 2018. Freeman ran as a write-in candidate and on election night, it was announced he had lost the race by four votes.

However, he sued for a recount and officials found 1,197 incorrectly marked ballots for Freeman. It was ruled those votes should count and Freeman won the election.

Once installed as mayor, Freeman and the city commission moved fast, installing two four-way stops on Main Street and another on Beaumont Avenue and adopting a new city logo. They also oversaw a major shakeup on the board of directors at the Harrodsburg-Mercer County Tourist Commission and took over collecting the restaurant tax.

After announcing his resignation, Freeman said he wished he had been able to do more.

“We’ve made some progress, but we haven’t made much progress since I got sick,” Freeman said.

At his last city commission meeting, Freeman was presented with a certificate making him a Kentucky Colonel by Lt. Gov. Coleman. Coleman called Freeman her favorite mayor.

Freeman started out as a computer programmer with Western Pioneer and Kentucky Central Life Insurance Companie before moving into banking. Over his 35 year career in banking, he served as senior lender, CEO, chairman of the board, and board member of nine different banks.

Freeman also served as a trade association executive from 1988 to 1998. Appointed banking commissioner by Gov. Paul Patton, Freeman worked to pass legislation that changed the commonwealth’s security industry and opened the door for statewide bank branching.

While he was born in Dayton, Ohio, Freeman’s family have lived in Mercer County since the late 1700s.

“Keep his family in our prayers,” Isham said.

Flags throughout Mercer County are at half mast to honor Freeman. All nonessential services so city workers can attend the funeral.

“I hate it for Art and his family,” said Mayor Billy Whitenack. “It’s just a tragic situation. We’ll pray for him and his family.”

“I’ve known him since I moved here,” Johnson said. “He was a mentor for me and a great friend.”

“Art was a strong and caring leader for Harrodsburg,” Moseley said. “He and I had our disagreements, but he always would work with me and we always found common ground. He was a true leader.

“He was a nice guy and an asset to Harrodsburg,” said Burgin Mayor Jim Caldwell, who was elected the same year as Freeman. ” He will be missed and my thoughts go out to his family.”

“I’ve known Art since I was four or five years old,” said Judge-Executive Milward Dedman. “He’s done great things for Mercer County. I respect the friendship I’ve had with him.”

A sign where people can express their condolences has been installed at the Vault—Ciders, Suds and Spirits on Main Street. Another sign will be installed across the street from Freeman’s home on Beaumont Avenue.