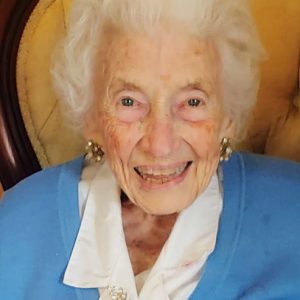 Born Nov. 3, 1928, in Lexington, she was the daughter of the late Mary Morgan Jones Wood and Everett Jones.

Mary Cecil lived her life in Burgin, where her interests and love ran deep. She attended kindergarten through 12th grade at Burgin School. She portrayed Shirley Temple in a 6th grade play, was a varsity cheerleader, played French horn in the band and sang soprano in the chorus. Upon graduation in May 1946, she attended Transylvania College for two years and was member of Phi Mu sorority. She then transferred to the University of Kentucky and obtained a bachelor’s degree in Business Administration, graduating in August 1950.

On Sept. 12, 1951, Mary Cecil married the love of her life, Robert Douglas Thompson. They had known each other since second grade at Burgin, and fell in love during their freshman year of high school. They dated four years of high school, four years of college (he graduated from Georgetown College) and one year after college. Mary Cecil and Bobby, as they were affectionately known by childhood friends, were married four months shy of 61 years, and together 70 years. They lived their entire married life and raised their two children in Burgin.

She was an extraordinary individual; accomplished, independent, loving, faithful and devoted. Her smile and love of life was contagious. She loved her husband, children, granddaughter and great-grandchildren with a selfless, passionate and steadfast love. She was a precious angel to her family.

Mary Cecil was on the Cradle Roll at Burgin Baptist Church, where she was a very active member for 75 years. She taught Sunday School for 52 years (young marrieds, high school girls, college age, singles and divorced, adult couples and senior ladies). She taught Training Union and Sunbeams, and Bible School the entire time her children were growing up. She and Bob were active in the Young at Heart senior group. She served on the church nominating committee, was publicity chair for Women’s Conferences, chaired Decorating Committee when new church building was built, and was drama director for Easter and Christmas cantatas.

For 16 years, she attended Harrodsburg Baptist Church, was a substitute teacher for the Welcome Sunday School class for senior ladies, and was active member of the combined Welcome-Glad Hand Sunday School class. She enjoyed attending the JOY senior group activities.

Mary Cecil worked at the ASC (Agricultural office), taught history, speech and English at Harrodsburg High School, and taught 5th grade and high school Speech at Burgin School. She was also a substitute teacher at Burgin for many years, and was director of Title 1 for 25 years, retiring in 1991. During the 1960s and 70s, she was PTA president for four years, served on the 7th District PTA board, and was a 4-H leader.

Mary Cecil was an active member of the Harrodsburg Historical Society for many years, the James Harrod Trust, was past chairman of the Ann Harrod Department of the Woman’s Club of Harrodsburg, and president of the Woman’s Club of Harrodsburg. For eight and a half years, she served as Red Cross Blood Chairman for Mercer County, and was a past member of the YMCA board of directors. She served on the governor’s task force on state park development in the 1970s. She was a Kentucky Colonel.

Mrs. Thompson was the recipient of the Rotary Club of Harrodsburg’s Outstanding Citizen of Mercer County award in 1975. Fort Harrod Business and Professional Women’s Club named Mrs. Thompson Woman of Achievement in 1978. She was a co-chairman of the Harrod Family Reunion during the Bicentennial of Harrodsburg.

In 2013, Mrs. Thompson interviewed senior residents from the Burgin area for the Mercer County Oral History Committee. She also recorded a condensed oral history of Burgin.

In 2015, Mary Cecil was named Outstanding Alumna of Burgin Independent School. Her husband Robert received the same recognition in 2012.

Mrs. Thompson was chairman of the 100th Anniversary of the city of Burgin in 1978. She wrote The History of Burgin for the Centennial Celebration. It was published by The Harrodsburg Herald as a special commemorative edition.

Mrs. Thompson was the ultimate historian and has been known for decades as the Burgin historian. She didn’t take people’s word for things. She always researched. That is a true historian. She didn’t do it the easy way. In 2017, two historical framed plaques were unveiled at Burgin Independent School. This permanent display represents the culmination of years of Burgin historical research by Mrs. Thompson. Just last year, she was honored as a Pioneer Woman by the Chamber of Commerce for her many years of contributions to Mercer County.

She was preceded in death by one sister, Betty Lois Jones Cox, and her loving stepfather, James E. Wood.

Funeral services were held Wednesday, Aug. 11, at 1 p.m. at the Burgin Baptist Church with Bro. Steve Hadden officiating. Visitation was Tuesday, Aug. 10 from 4-7 p.m., and Wednesday from noon until the hour of service. Burial was in Spring Hill Cemetery.

Memorial contributions are suggested to Heritage Hospice, or to Gideons International.