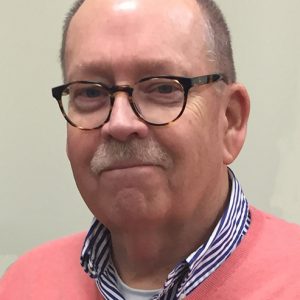 He was a banking executive for several institutions and was most recently the mayor of Harrodsburg. He was a member of the St. Andrew Catholic Church.

He was educated as a computer programmer until getting into the banking industry as a programmer, but was elevated to a loan officer and later served as a vice president. Over his 35 year career in banking, he served as senior lender, CEO, chairman of the board and board member of nine different banks. He also served the industry as their trade association executive from 1988 to 1998, when he was appointed to be Kentucky’s Banking Commissioner by Gov. Paul Patton. Under his leadership there, he led the passage of important legislation that changed Kentucky’s security industry and opened the door for statewide bank branching.

After retiring from banking, he started and ran a successful PPG paint store, Fort Harrod Color & Supply, for eight years. In the fall of 2018 he was elected mayor of Harrodsburg as a write-in candidate and served through June 2021.

Survivors, in addition to his wife, include: one son, Will (Stephanie) Freeman of Lexington; one brother, Bill (Marlene) Freeman of Harrodsburg; two grandchildren, Anne Parker and Benjamin Louis Freeman; and several nieces and nephews.

He was preceded in death by one sister, Doris Ann Carey.