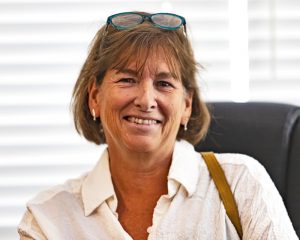 The Harrodsburg City Commission has appointed Jennifer Kazimer as a city commissioner.

Kazimer replaces Billy Whitenack on the commission. At the last city commission meeting, Whitenack was chosen to replace Mayor Art Freeman, who resigned for health reasons in June. Whitenack had previously been serving as mayor pro tem.

Kazimer and her husband, Tim, are best known as the owners of the Kentucky Fudge Company on Main Street. They are originally from Ohio, where they both worked in health care. Jennifer Kazimer was a nurse and Tim Kazimer was a physical therapist. The couple, who have four daughters, found Harrodsburg while visiting Jennifer Kazimer’s father, Phil Morris, who worked at Centre College in Danville. In 2005, they leased the old Rexall Drugstore on Main Street, which had been closed for 20 years. While Kazimer said the James Harrod Trust had done most of the work in restoring the property, the Kazimers spent five months converting the store into a restaurant, the Kentucky Fudge Company.

Five years after opening the Kentucky Fudge, they purchased the building from the James Harrod Trust and expanded next door, doubling their capacity. This year, after closing the Fudge because of the COVID-19 pandemic, they opened the Vault Ciders, Suds and Spirits–the home of Bum Ditty Hard Cider–in the building which had formerly been the National Hotel. They also opened James Flats overnight lodging.

As their businesses have grown, the Kazimers have grown prominent in the community. Tim Kazimer currently serves as chair of the Harrodsburg-Mercer County Tourist Commission.