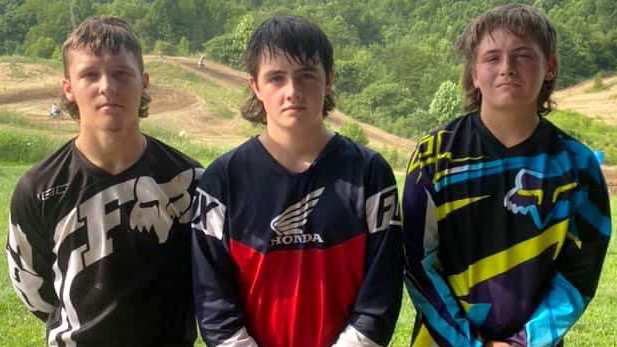 Many boys couldn’t imagine a better time than riding their dirt bikes through a field, revving up their engines and throwing dirt in every direction. Three friends from Mercer County–Mason Abrams, Gavin Howard and Kaden Wilson–have taken their passion of dirt bike riding to a competitive level, one more recently than the others.

Abrams began riding an ATV at the age of five and made the switch to dirt bikes at 11. He convinced his riding buddies Howard and Wilson to chase their dreams of one day competing in Supercross.

“I wanted my buddies and I to strive for a big goal, and that’s to get in Supercross maybe one day and all of us are helping each other out right now. I’m teaching Kaden his gears he needs to be in for jumps and all of that,” said Abrams.

Wilson has been riding dirt bikes since he was eight and about a year ago Abrams convinced him to start practicing motocross. He recently finished his first race at Daniel Boone MX in London, where Abrams has raced for some time. Thirty minutes before race time, an onslaught of rain and stormy weather turned the once semi-hard surface into a slick and muddy track.

“I was very nervous,” said Wilson, who had no reason to be. The rookie placed second and is already itching to get back on the track and win.

“It was very fun. I will definitely be back to the next race trying to get first,” said Wilson. He described why he has a passion for riding dirt bikes.