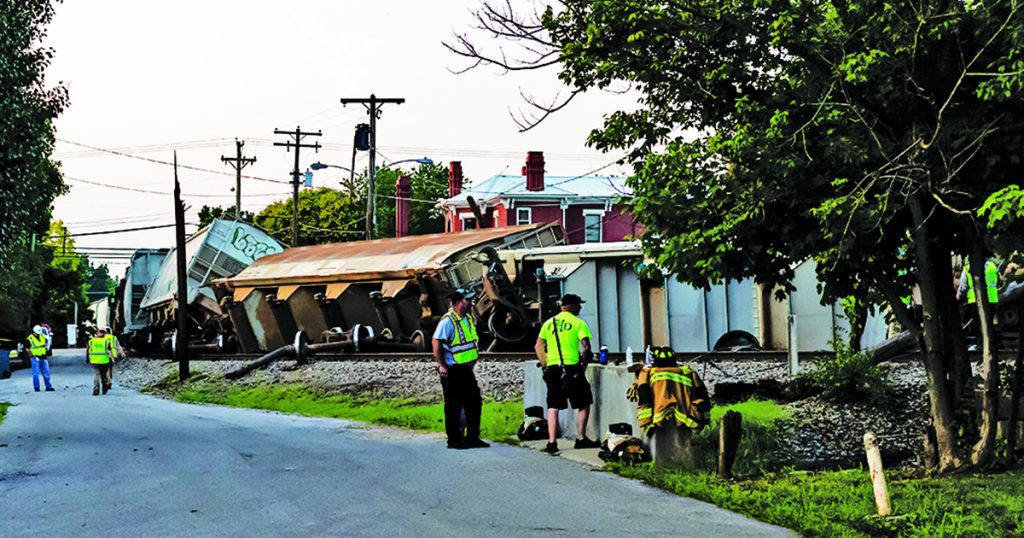 The Harrodsburg Herald/Robert Moore
Railroad crews worked to clear the tracks after a train derailment on Thursday. Authorities are still trying to determine what caused seven cars to capsize.

Authorities are still trying to determine what caused a Norfolk Southern train to derail last week.

It took work crews over seven hours to clear the tracks after a seven cars flipped over in downtown Harrodsburg around 5 p.m. on Thursday, July 22. The tracks were re-opened just after midnight, according to the railroad.

While crews worked to clear the capsized cars and determine the condition of the tracks, the crossing at West Lane was the only one in the city that remained open to traffic.

According to Norfolk Southern, the cars were empty. The railroad was unable to explain why the cars overturned.

“The cause of last week’s derailment is still under investigation,” said Jeff DeGraff, Norfolk Southern Media Relations. “Once all information and evidence has been collected and analyzed, we will report our findings to the Federal Railroad Administration, per usual protocol.” 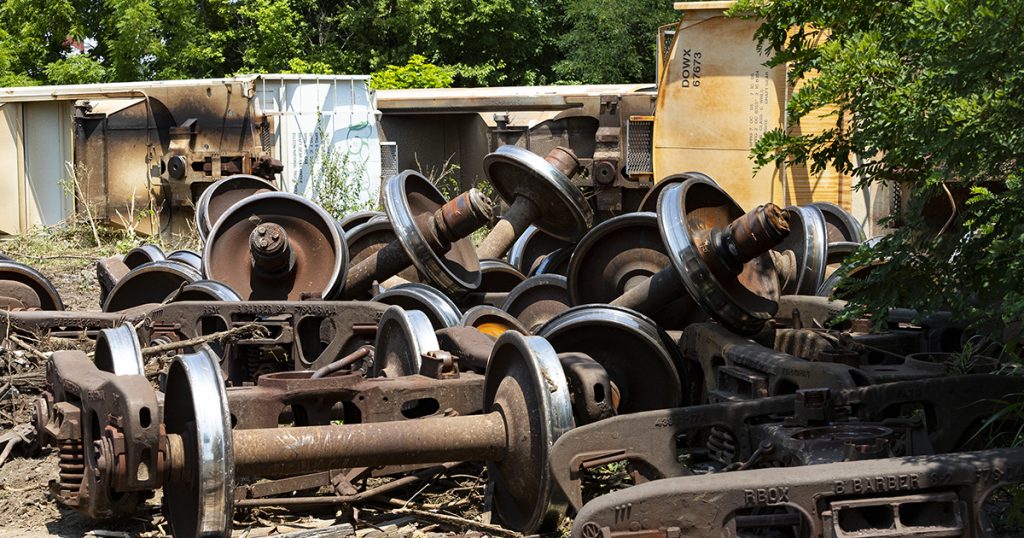 The Harrodsburg Herald/Robert Moore
Wheels and capsized cars piled up after crews cleared the tracks Thursday.

DeGraff said Norfolk Southern has contacted the owner of the house that was clipped by a capsizing car and is working with him on getting the house repaired.

While the Federal Railroad Administration initiated a preliminary investigation into the derailment, they are not conducting a formal investigation. According to the FRA, railroads are required to submit reports 30 days after the event.

“That submission by Norfolk Southern Railway will include a determination of cause and will be posted online about three months from now,” said Warren Flatau, the deputy director of public affairs for the FRA.

Chuck Bugg, the Mercer County emergency management director, said investigators are exploring the possibility that too many empty cars were in the middle of the train.

Property damage was minimal from the incident. One house close to the tracks was clipped during the derailment. If the train had been a double-decker, with cars piled on top of one another, or if the train had been carrying chemicals, it could have been a whole lot worse. 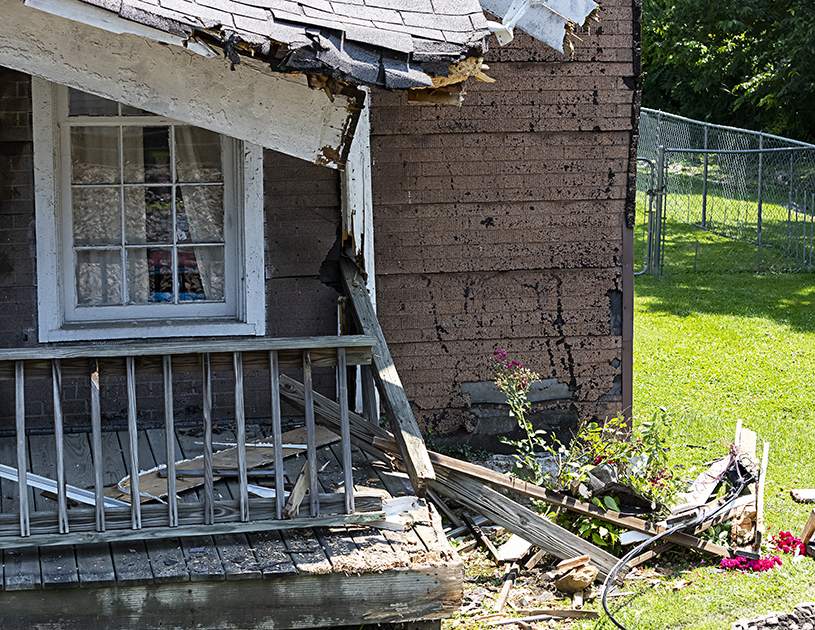 The Harrodsburg Herald/Robert Moore
A capsized train car smashed into this home last week. According to Norfolk Southern, the railroad is working with the owner to make repairs.

Bugg praised the railroad for their quick response.

“They handled everything that needed to be done,” Bugg said. “I give them credit for not waiting around.”

Mercer County has a long history with the railroad, and not always a happy one.

In 1967, a Southern Railway freight train derailed, capsizing eight cars and sending one smashing into the home of Mrs. Billy Taylor on Broadway.

According to a Lexington Herald-Leader story shared by Bobbi Dawn Rightmyer on Facebook, the 90 foot long car smashed into Taylor’s home with enough force to knock the house off its foundation.

In 1973, a bridge located about a mile west of Salvisa collapsed and 31 cars were derailed. One car, filled with a commercial salt called Bithenyl, plunged into the Salt River.

According to a Harrodsburg Herald story shared by Rightmyer, the chemical solidified on the surface of the river, and authorities warned farmers to keep their livestock away from the river. 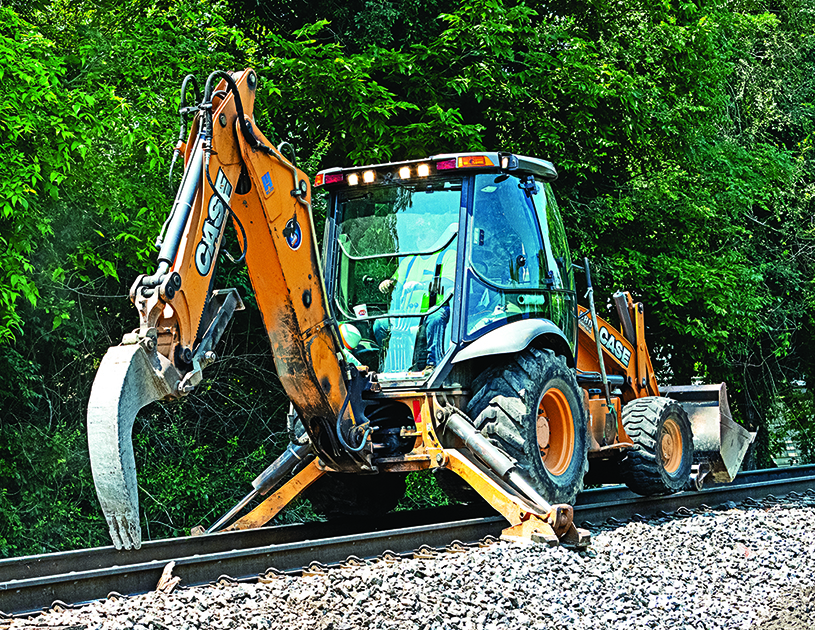 The Harrodsburg Herald/Robert Moore
A crew worked on the tracks Friday following last week’s derailment. Officials are still trying to determine what caused seven cars on the train to flip over.

According to federal statistics, there were 21 accidents of incidents involving the railroad in Mercer County between 2011 and 2019, the latest year for which statistics were provided. There were two fatalities in that same period.

In 2017, Norfolk Southern replaced every railroad crossing in Mercer County. At that time, up to 27 trains traveled through the area every day, according to the Kentucky Transportation Cabinet. Last year, the railroad struck a deal with the City of Harrodsburg to close the crossing on Broadway Street.