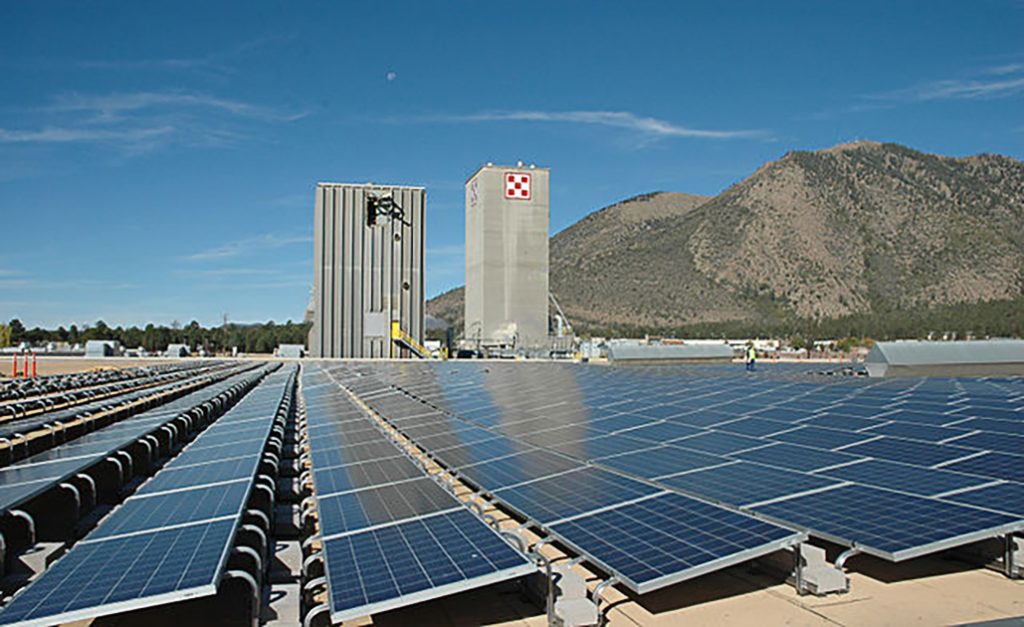 Purina’s solar farm in Arizona in 2010 via Wikimedia Commons.

The Harrodsburg-Mercer County Planning and Zoning Commission made three decisions at their last meeting, but their biggest decision—especially when it comes to the future of solar power—may be yet to come.

The planning and zoning commission has been looking at drafting an ordinance which would allow solar facilities as a conditional use—meaning they would have to be approved before being built. Officials have stressed that this ordinance is not connected to any project.

Even though there is already a solar farm in Mercer County—Kentucky Utilities has operated a 10 megawatt solar facility at the E.W. Brown Generating Station in Burgin since 2016—last year local residents opposed a proposal to build a $150 million solar farm on the old Wilkinson farm along U.S. 127. The project would have had about half a million panels spread across 1,200 acres and could have generated revenues of up to $9 million for the county over 35 years.

While solar power may not be popular with some here in Mercer County and other rural areas across the country, its popularity is growing rapidly across the world and here in the U.S.

According to a March report from CNBC, solar installations grew 43 percent in 2020, reaching a record 19.2 gigawatts of new capacity. California, Texas, Florida, Virginia and North Carolina were the top five states for growth in solar power. According to CNBC, the U.S. solar market will quadruple by the end of the decade.

Much of that growth is fueled by large companies such as Amazon, Walmart, General Motors and FedEx, which have made the commitment to be carbon-neutral by 2040. In March, FedEx announced they were investing $2 billion to start electrifying their fleet of more than 180,000 vehicles, according to the Washington Post.

Earlier this year, the zoning commission was asked by Judge-Executive Milward Dedman to look into creating an ordinance for solar facilities. Commissioners have been reviewing ordinances enacted by other localities. However, the head of the subcommittee, attorney Mike Harden, has resigned because he has been retained to represent a former city employee in a wrongful termination suit against Harrodsburg. In addition to heading the solar subcommittee, Harden was also the vice chair. Board member Jonathan Elliott was selected as Harden’s replacement as vice chair.

While discussing how to proceed with the solar ordinance, Elliott said he had been approached by a solar advocate from Danville who offered to show him an ordinance.

“They’re putting you in a bad position,” said Executive-Director Shawn Moore. “It will get you all in trouble.”

Moore recommended they not talk to advocates. He said the commission had been asked to come up with the amendment themselves.

Board member Tom Hardy took Harden’s spot on the solar subcommittee, who are continuing to review ordinances. Public meetings will be held before anything is enacted, officials say.