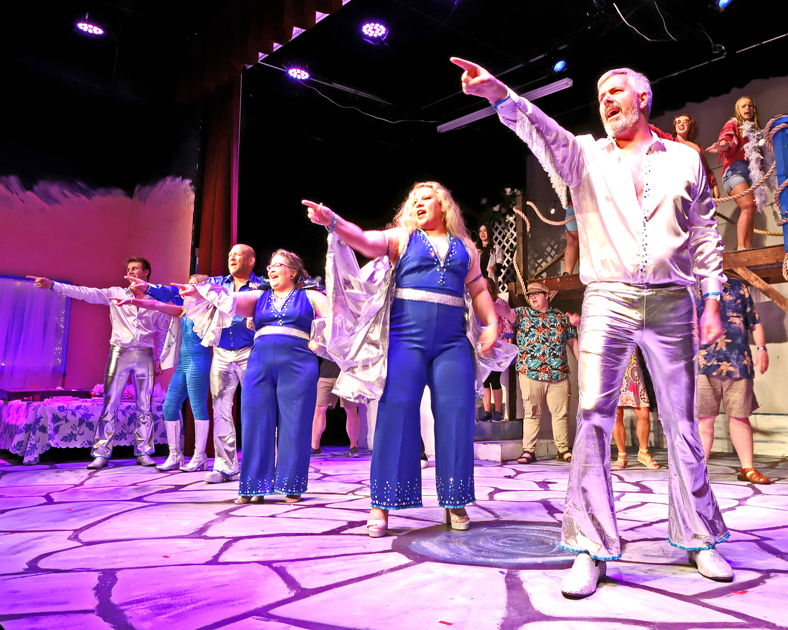 File Image. The cast of “Mamma Mia!” a musical featuring the songs of the Swedish supergroup ABBA, premieres this weekend at Ragged Edge Community Theatre.

After a long hiatus due to the COVID-19 pandemic, Ragged Edge Community Theatre is kicking off the 2021/2022 season with its second New Works Festival, Friday, Aug. 6, through Sunday, Aug. 8.

Presented as “staged readings” each piece will be followed by a talkback session with the cast, director, and author. This year’s plays—including one by Father Al DeGiacomo, the former pastor at Saint Andrew Church—deal with a wide variety of subjects and differ in tone as well.

Most folks remember having to read Franz Kafka’s intense short story “The Metamorphosis” in school. It would probably surprise them to learn that in the year before he died Kafka took it upon himself to write a series of letters to a brokenhearted little girl from her doll, Lotti, who was not actually lost, but “out in the world, having adventures.” Written with humor and heart, this is a play about how even the most hardened and cynical among us can confound expectations with unexpected outbursts of compassion and humanity. Shimer is the director of communications for Villanova University’s College of Engineering. She lives in Media, Pennsylvania. Her first play, ” A Ghost of a Chance,” received a July 2020 Zoom production as a finalist in FutureFest at Dayton Playhouse and was selected for Rising Stars 2020 at Southwest Theatre Productions. In July 2021, it will receive a staged reading as one of three selections for Cincinnati LAB Theatre’s New Works Festival.

• “Boats Against the Current” by Bill McCann premiers Saturday, Aug. 7, at 7 p.m.
Using clever theatrical devices to convey his inner battle, “Boats” tells the story of Harrisson, a man in the early stages of Alzheimer’s. He fights to maintain his memory and literally his sense of “self” while concealing his condition from his family. Told with humor and pathos, this play will resonate with anyone who has had to say “the long goodbye” McCann is the founder and current president of the Kentucky Playwright’s Workshop. He is also publisher, editor and arts columnist for the Winchester Sun. He has written plays which were produced at the University of Kentucky, the Mid-America Theatre Conference and at the Kentucky New Play Series at the Kentucky State Fair.

• “Seeking Henry Gambrell” by Father Al DeGiacomo premieres Sunday, Aug. 8, at 3 p.m.
The enigmatic portrait of Henry Gambrell, a young man raised in an orphanage and who lived among the Shakers for years but who never “signed the covenant.” Set in Harrodsburg and the Shaker community at Pleasant Hill, this is the story of two men separated in time, but each with a desire to find something. One is seeking family and a place to call home. The other is looking for the right and true path forward in his life.

Father DeGiacomo, who holds a doctorate in drama from Tufts University, has taught drama and theatre at Mount Aloysius College in Pennsylvania and Berea College in Kentucky. A member of the Dramatists Guild, his play about Southern writer Flannery O’Connor, “No Surer Sign of Grace,” was presented at the first Ragged Edge New Works Festival in 2019.

Admission is $12. One admission is good for all three festival performances

Tickets are available by visiting www.raggededgetheatre.org or can be purchased at the door.